Programme for government: Will this one fly?

They appear to have got what they asked for, but will it be enough for the Greens? 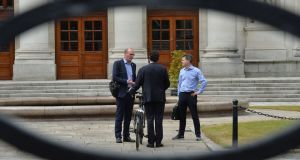 Sometime around mid-April, in the first formal confirmation it might consider entering government, the Green Party sent 17 demands to Fine Gael and Fianna Fáil.

It has taken the best part of two months – and what has sometimes felt like a political lifetime – for that process to have come to a conclusion.

Politics, so the old maxim goes, is about the art of compromise. By the yardstick of the details that have been released, to use a sporting analogy, the Greens have achieved a PB (personal best), getting their way, or almost their way, on nearly all 17 “asks”.

All the parties will need to go through a process of getting their parliamentary parties, and then their members, to ratify the agreement. There have been dissenting voices in both Fine Gael and Fianna Fáil to this particular three-legged stool but the expectation has always been that their membership will follow the views of the leadership on the matter.

With the Greens, it has been a little different and everyone involved in the process has been fully aware of that from the start. There has been a momentum-style growth in membership in the past three years (from about 700 to 3,200) and with it has come some momentum-like change in dispensation. Getting two-thirds support has always been a high bar, made even more challenging by clear signs of fragmentation within its own corps. There is no doubt the Green negotiators were able to use those imponderables as leverage in negotiations.

What has emerged has been a document that chimes with most of the 17 demands. The 7 per cent reduction in emissions is conceded. So too is a ban on fossil fuel exploration, on the Liquid Natural Gas terminal on the Shannon Estuary, on the importation of fracking gas. An astonishing 20 per cent of the transport budget (€360 million a year) will go to walking and cycling while two-thirds of the rest will go to public transport.

“On every page of the [programme for government] document you will see that it’s green,” said Pauline O’Reilly, a Green senator. Brian Leddin, its Limerick TD, said the document would mean a “step change in the history of the party and also of the country”. Its agricultural spokeswoman, Pippa Hackett, said the programme reads green throughout, even in her own policy areas, which was a matter of much contention.

But the picture in the party is more complicated than that. There is also an undeniable rift between the old and the new, the pragmatists and the idealists, the centrists and left-wingers. It is personified in the increasingly toxic row over leadership, and the competing claims of Catherine Martin and Eamon Ryan.

Back in 2007 – and again when it was renewed in 2009 – the Greens backed the programme with Fianna Fáil by 84 per cent. That might be out of reach this time but to get 67 per cent, it will need the 12 TDs to be united. It’s expected that Martin will back it strongly – she was, after all, the head of the negotiating team and was reportedly teak tough in the past week, both with her own team and with the other two parties (that will do her no harm in the medium term).

While some insiders described the Green approach as “collegiate”, some of those who opposed this coalition such as Neasa Hourigan, Francis Noel Duffy and Patrick Costello have yet to declare their hands. On a ring-around of councillors on Sunday night who were not keen on the arrangement, most said they would reserve judgement until they had read the document.

However, the momentum does seem to be with membership backing the deal. Abolishing Shannon LNG would have been huge for members who came in through Extinction Rebellion. The 7 per cent figure is also a big ticket item, as are the, frankly, breath-taking concessions from the two motorway champions – Fianna Fáil and Fine Gael.

Green TDs said privately on Sunday that the initial feedback from members was positive. Time will tell if that is indeed the case.