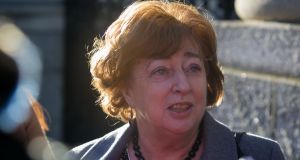 Social Democrat TD Catherine Murphy: wants the Department of Communications to make available an unredacted copy of an expert report by Analysys Mason which reviews the operation, management and access to the metropolitan area networks. Photograph: Gareth Chaney Collins

The Public Accounts Committee (PAC) is set to question a number of companies which previously competed for the National Broadband Plan contract.

Committee members are expected to agree on Thursday to ask companies such as Eir and Enet to appear before it in the coming weeks.

The committee will also discuss the cost of the National Broadband Plan at its meeting next week over fears that the final bill could be as high as €3 billion. Separately, Fianna Fáil and Fine Gael are expected to discuss the rollout of broadband at confidence-and-supply talks on Thursday.

A senior source said that Fine Gael would be asked to provide an updated figure in relation to how much the plan would cost. A spokesman for Catherine Murphy, the Social Democrats Co-leader, has also written to the other TDs on the PAC seeking to widen their examination into the controversial plan. It is expected TDs will agree to the proposal.

A source said those companies could be brought in as early as the new year. Their decision to appear would be voluntary, however, as they are private companies.

Ms Murphy is also looking for the Department of Communications to make available an unregulated copy of an expert report by Analyses Mason which reviews the operation, management and access to the metropolitan area networks.

The Dáil is also set to hold a special debate on the controversy next Tuesday. It comes after a report by independent auditor Peter Smyth found that a series of meetings between former minister for communications Denis Naughten and David McCourt did not contaminate the process.

Minister for Communications Richard Bruton promised on Wednesday that a decision would be made on whether to proceed with the current plan “in the near future”.

“The position is that the final tender, which came at the end of a competitive dialogue, was lodged with my department on September 18ah.

“That tender is now being evaluated by the department to examine issues such as the robustness of the technology, the governance of the project, and its value for money. I hope to be in a position to bring that to Government for a decision in the near future,” he said.

“It would not be possible for me or anyone else to outline a particular timescale or schedule until a contract is signed and the Government makes a decision to approve a particular proposal. This is at the end of a long process of procurement and we have to wait for a decision before we can indicate the outcome and the particular schedule.”