Former US envoy to Ireland rails against ‘troubling’ Trump 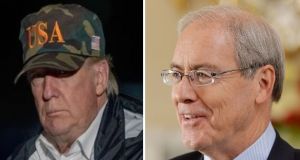 Former US ambassador to Ireland Kevin O’Malley was critical of President Trump’s performance in office.

US president Donald Trump’s claims about criminals in the migrant “caravan” attempting to cross the US-Mexico border is similar to 19th century slurs on Irish immigrants, a former US ambassador to Ireland has said.

Kevin O’Malley, the Missouri lawyer who was Barack Obama’s second ambassador to Dublin, drew the comparison between Irish immigrants and Central American migrants in a blistering critique of Mr Trump during an address to the Bar of Ireland.

The Democrat, who was US envoy from 2014 to 2017, accused the Republican president of pushing a “never-ending” list of “falsehoods” – from his claims about the size of his inauguration crowd to his “blind acceptance” of Russian and Saudi claims of innocence in order to prevent legitimate arguments about policy.

“These falsehoods come at such a pace that the sport analogy of ‘flooding the zone’ is perfectly accurate,” said Mr O’Malley during the 2018 Daniel O’Connell Memorial Lecture.

This was “flooding and dulling the sense of outrage since it is impossible for most of us to be outraged all of the time”, he said. “These falsehoods occur almost too frequently to shoot down.”

In a speech on what he described as the assault on the rule of law by the current US administration, Mr O’Malley said there had been “dozens” of flagrant examples of Mr Trump trampling on “established norms and customs”.

These included “the sophomoric tweets with secondary school nicknames and ad hominem attacks on critics, executed at the level of a schoolyard bully”. And the “baseless accusations of criminal activity against political opponents and calls for their arrest and prosecution”.

Mr O’Malley, the grandson of Co Mayo immigrants, said “the historical amnesia and lack of decorum are numbing”.

He described Mr Trump’s rejection of the post-second World War global order and attacks on US justice and intelligence agencies as “the two most troubling breaks with established norms”.

He said: “President Trump has seriously questioned our long-standing allies and alliances while turning both a deaf ear and a blind eye to Russian election interference and physical aggression.”

This, along with North Korea’s flaunting of a nuclear agreement and the recent murder of journalist Jamal Khashoggi by the Saudis, is “the type of conduct which would, under accepted American norms and customs, draw quick and unequivocal condemnation,” said Mr O’Malley.

He called Mr Trump’s attacks on the Department of Justice and its “apolitical” attorneys “deeply troubling”. His conduct during the investigation into Russia interference into the 2016 election “could not paint a clearer contrast between accepted American norms and customs and the proposed new order”.

Mr O’Malley set out four key indicators of authoritarian behaviour by Mr Trump that, experts claim, leads to “the destruction first of democratic institutions and then democracies themselves”.

“Rather exporting democracy as we have often done over the last 70 years, we currently seem more interested in importing oligarchy,” he said.