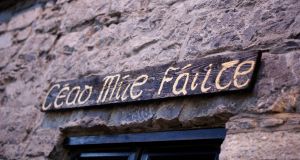 There has been an alarming drop in the number of Irish speakers in the country’s eight Gaeltacht areas in the past five years, according to official census figures, indicating that Irish is in danger of becoming extinct as a native language.

The latest official figures published by the Central Statistics Office also show the first decline in more than 80 years in the overall percentage of Irish speakers in the State.

The total number of people who said they were being able to speak Irish in April 2016 was 1,761,420, a slight drop since 2011 but, more significantly, the lowest percentage of Irish speakers since 1946.

The decline in Gaeltacht areas is starker. There has been a fall of an astonishing 11.2 per cent of daily Irish speakers since 2011. Only 21.4 per cent of a total population of 96,090 in the native speaking areas said they spoke Irish on a daily basis.

The gravest drop in the number of daily speakers in a Gaeltacht was in Mayo, home county of Taoiseach Enda Kenny. There was a drop of almost 25 per cent in daily Irish speakers in just five years, a calamitous fall for a tiny Gaeltacht.

This precipitous drop provoked criticism from the Opposition and language activist groups, which have been scathing of the Government’s approach to the language. Conradh na Gaeilge said the Government had refused to invest in the 20-year Strategy for the Irish Language over the past six years, rendering it completely ineffective.

However, the Minister of State for the Gaeltacht Seán Kyne defended the Government’s record on the strategy, saying it had invested in the strategy and also pointed out that it was only six years into its 20-year term.

Dr John Walsh of the Department of Irish in National University of Ireland, Galway, described the results as “worrying”

Peadar Tóibín of Sinn Féin said the Government’s policy was in chaos.

Dr John Walsh of the Department of Irish in National University of Ireland, Galway, described the results as “worrying”.

“The results reveal falls in all of the significant figures: daily Irish speakers outside the education system, and ability of Irish and frequency of its use in the Gaeltacht. The dramatic fall in numbers of daily speakers in the Gaeltacht is particularly significant.”

He added: “The negative returns raise fundamental questions about government policy on the Irish language, in particularly the 20-year Strategy for the Irish Language, which set out highly unrealistic targets for increases in speakers.

“It would appear that that the language-planning process in the Gaeltacht and elsewhere is having little effect. This is perhaps unsurprising, given the very small state investment in it.”

Dr Walsh pointed to a less pessimistic outlook outside the Gaeltacht areas.

“As was the case in the 2011 census, about two-thirds of daily speakers outside the education system are located outside the Gaeltacht and, while this number has also fallen, the decline is much smaller [slightly more than 1 per cent].

“This indicates that the numbers speaking Irish daily outside the Gaeltacht, although small, are more stable than within the Gaeltacht,” he said.

1 With Lincoln looking on, the crowd dropped to their knees as 7pm approached
2 Covid-19: Harris urges people not to think it’s ‘mission accomplished’ ahead of next phase
3 Gardaí move against cyber crime, prostitution gang in Dublin
4 Luke ‘Ming’ Flanagan bares his bottom half to European Parliament
5 Trinity College Dublin to resume with as much face-to-face teaching as possible
Real news has value SUBSCRIBE