Most Irish want to stay in EU, but almost half fear Brexit will lead to hard border 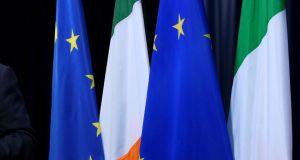 An overwhelming majority of Irish people wish to remain in the EU. Photograph: John Thys/AFP/Getty Images

An overwhelming majority of Irish people wish to remain in the EU, but almost half believe that Brexit will result in a hard border with Northern Ireland, according to a poll published today by the European Movement in Ireland.

The poll, conducted amongst over 1,000 people nationwide by Red C, is released to mark Europe Day. It finds that 88 per cent of respondents agree with the statement “Ireland should remain part of the EU”.

Almost half (49 per cent) of voters said that they expected Brexit to lead to a return of a hard border between Northern Ireland and the Republic.

Asked if they agree that “taking everything into consideration, Ireland has on balance benefitted from being a member of the EU”, 87 per cent of voters say they agree.

However, support for one aspect of European co-operation was much weaker. Asked if they agreed with the statement “Ireland should be part of increased EU defence and security co-operation” just over half (57 per cent) said they agreed. This is noticeably less enthusiastic than the general support for the EU expressed in the poll.

Support for continued EU membership has remained quite stable year-on-year, Red C notes, with an overwhelming majority of close to 90 per cent continually supporting Ireland’s place in the union.