‘Brexit has put the Border back into people’s psyches’

In the village of Muff, Co Donegal, a sense of dual identity is papable among the residents 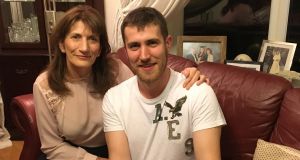 Muff residents Marie Lindsay and her son, Denis, who recently returned from Canada.

“I’m Donegal through and through, but Derry is my city.”

School principal Marie Lindsay is typical of many residents in the Border village of Muff in Co Donegal.

Born and raised there, she still lives across the road from the family home, but crosses the Border every day to work at St Mary’s College in Derry.

“I remember what it was like to have a ‘hard Border’, but I have also learned to live now in an area where the checkpoints are gone and there is fairly free movement and I have learned to think of Derry and Muff as almost seamless.

“Yes, the signs change from kilometres to miles and the currency changes, but the flow of traffic is hassle-free.

“Everybody has connections, everybody has family on both sides of the Border. You take any child in Derry, they’ll have an aunt or a granny or some relation from Buncrana, and they’ll all go to Malin Head or Culdaff for their holidays.

“I have more affinity to Derry than I have to Donegal town, and I don’t think anybody in Dublin would really understand that.

“Living on the Border gives us almost a dual citizenship or dual identity.”

In Muff – and the other villages which ring the Border to the west of Derry city – that sense of duality is simply a feature of cross-Border life.

Most carry two purses, or have change in two currencies in their pockets. Some carry two mobile phones. The news comes from the BBC and UTV as well as from RTÉ. Garages, shops, pubs take sterling as well as euro.

Many send their children to school in the North, and are treated by the NHS – some officially, others unofficially – through what’s become known as “grannying”, or the use of relatives’ addresses in Derry.

The North is the area’s biggest employer, with almost half of Muff’s working population employed across the Border.

The 2013 Letterkenny Gateway Report put the figure at 48.5 per cent or 333 people; in another Border village, Killea, the figure was 48 per cent (or 261 residents) employed in Northern Ireland.

Catherine Woodrow is typical of many Derry people who moved across the Border in the early to mid-2000s because of spiralling property prices in the city and the construction of new, more affordable housing developments just across the Border.

“There was no real opportunity in Derry at the time for us to buy a house, but five minutes down the road in Muff we could get a house that was cheaper and much better than anything we could have afforded in Derry.

“Most of our neighbours moved here from Derry, and most of them still work in Derry.

“I love living in Muff to be honest, and although I send my daughter to school in the North my son always went to the youth club down the road and my daughter goes to the Brigini, so we’ve always tried to do things here so that we are part of the village.”

“The main impact for me was the drop in the value of sterling, because I’m paid in sterling and pay a mortgage in euro, so if sterling weakens it’s more expensive for me to pay my mortgage, but the latest is I’ve heard is that Brexit might actually strengthen the pound which would benefit me.

“If there is a ‘hard Brexit’, how is that going to work in terms of even simple things like shopping? It makes sense to shop in Derry because it’s so close and I get paid in sterling, but what if you got stopped at the Border with shopping in the boot?

“I’ll be honest, we have started looking at property websites. Not in a serious way, it’s just a consideration, but we’re at the stage of asking ourselves, if we were to move to Derry, where would we move to?”

Emma McLaughlin is in a similar position. She’s from Muff, but works in the IT sector in Derry.

“I’ve seen a real drop in salary, at the minute it’s probably 10 per cent but when the Brexit vote happened it was probably 20 per cent, and it’s going to keep fluctuating.

“A lot of my colleagues are the same, they work in the North and live in the South and they’re under pressure to pay their euro mortgages.

“Brexit wasn’t the only factor, but I do know people who’ve left jobs in the North and are now working in the Republic just to get away from all the negotiations and challenges over Brexit.

“I’m trying to weigh up my options... I’m used to living on the Border – there’s always been that element of two countries and two sets of rules – but now there’s a huge amount of fear and there are no answers because it’s just such an unknown.

“There’s very little in terms of the economy in Inishowen, and outside of Letterkenny jobs are extremely limited.

“We contribute a lot to Derry and its economy, but we also depend on that economy for our jobs, so if that door’s going to be locked to us I want to know what the Government are doing about it.

“Dublin is very far removed from the northwest and I don’t see anybody on the ground trying to understand the implications of Brexit for us Border people and that’s very worrying.”

Getting paid in sterling

Mrs Lindsay’s son, Denis, returned from Canada 18 months ago and set up his own plumbing business a few months before the UK voted to leave the EU.

“I have two houses I’m working on a couple of miles from here, new houses which are being built at the moment, and one of them is going to come to a standstill because the owner is earning in sterling and he can’t get a euro mortgage.

“When you start to get that sense that people aren’t building houses, you then worry that there could be a potential exodus out of all these Border villages and towns.

“That means empty houses, so even if I do manage to live round here all my immediate client base is gone.

“If there’s a hard Border people will move, and I would have to choose a side.

“Derry is probably the safest bet, but I want to live in Donegal.”

“It’s been nice to see the area regenerated,” says his mother, Marie.

“Muff is vibrant at the moment, we’ve a wee boutique now, and a great hairdressers.

“I think of places like the primary school. A lot of the pupils are from families who have moved out from Derry and you would worry about what would happen to the life of the school if families stop relocating out here and bringing new life to the area, or if families that are here make the decision to move back North.

“The Border had almost dissolved but now Brexit has put the Border back into people’s psyches.

“At a family level, at a community level, and at a business level, that can only be detrimental.”