With a ‘bloody difficult woman’ negotiating Brexit, Ireland will need to play hardball too 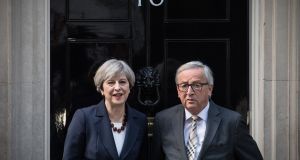 It is good to see Irish concerns about the impact of Brexit being given time, thought and focus, and it was necessary and welcome for those concerns to be taken on board in the drawing-up of priorities by the EU for its handling of negotiations with Britain. But it remains doubtful that Irish concerns will be a priority for Britain as tensions over Brexit heighten. The focus during the week on the difficulties between European Commission president Jean-Claude Juncker and British prime minister Theresa May might initially have given those who are unhappy with Brexit satisfaction that there seemed further exposure of how fanciful the British government is about how it can manage the divorce, but any smugness is misplaced.

The leaks and recriminations inevitably resulted in May moving to a more entrenched position and ramped up the idea that as the Bloody Difficult Woman – the words used by Kenneth Clarke to describe her which she has now taken ownership of in order to trumpet her credentials as the 21st-century equivalent of the 20th-century Iron Lady – she will not allow Britain to be bullied. This stance may sustain the flame of English nationalist indignation and righteousness, and none of that is good news for Ireland.

Political scientist Stephen George, who wrote an account of Britain’s first two decades in the EU, noted that the sense of Britain as an awkward member was heightened by the tone adopted in EU negotiations, particularly under Harold Wilson and Margaret Thatcher, with a rhetoric that was adversarial and nationalistic. The impression created was that of “a battle between Britain and the ‘Europeans’ who were trying to cheat the British and who needed to be put in their place by firmness and determination to protect the national interest”. That did not necessarily mean this tone was part of a well-worked out strategy; it was as much a product of domestic politics as a “process of reasoning”.

Soon after taking office Thatcher said privately of her fellow European leaders, 'They are all a rotten lot'

May was a Remainer during last year’s referendum, albeit a fairly mute one, but, as historian Andrew Roberts has noted, Thatcher was also in favour of Britain’s continued place in the EU. What happened after she became prime minister changed Thatcher’s views. “It was the day-to-day practical experience of working with Brussels that turned Thatcher into such a passionate Eurosceptic,” said Roberts. Soon after taking office she said privately of her fellow European leaders, “They are all a rotten lot” and, in a line that will jump out at May, given the, in some estimates, €100 billion exit bill being mooted, “I have the money and they won’t get their hands on it.”

But Thatcher was also responding to unease within her own party, and the internal Conservative party wrangling in the 1980s came during a period when Thatcher did not face strong political opposition from the Labour Party. Neither, it seems, will May; a whopping majority for the Conservatives seems inevitable in the forthcoming general election.

The idea that Europe is the source of all Britain’s problems is, after all, delusional

It is quite possible that Britain, despite the temporary nationalist fillip May might get from a hard Brexit, will pay a big price in the long term. The idea that Europe is the source of all Britain’s problems is, after all, delusional, and even Thatcher – as her private secretary Charles Powell has recalled of her attitude to the EU – ultimately aimed “to change it not leave it” but ran out of support within her own government. The issues highlighted by former prime minister John Major in February will also need to be faced: he sought to offer “a reality check on our national prospects”. In relation to the US as a replacement for the EU, he argued that despite the view of committed Atlanticists, the “special relationship” between Britain and the US “is not a union of equals . . . America’s size and power means we are, by far, the junior power.”

Major was also unequivocal regarding the threat to Anglo-Irish relations: “Uncertainties over border restrictions between Ulster and the Republic are a serious threat – to the UK, to the peace process, and for Ireland, North and South. A special deal will be necessary.”

Anglo-Irish relations are likely to get very fraught as a result of all these tensions and the absence of a shared EU space. From the 1970s, shared European meetings often provided an opportunity to ease strain between the two countries. Some of the provisions of the Anglo-Irish Agreement were debated on the fringes of European Council summits; at difficult points in the 1990s informal meetings on the margins of European summits were an important part of the peace process, and negotiations initiated in Brussels culminated in the historic Downing Street Declaration in 1992.

Minister for Foreign Affairs Charlie Flanagan has expressed satisfaction that Irish concerns about Brexit have been “identified, appreciated and recognised”. That is a good start, but the harder battle looms and that requires Irish leaders to be bloody difficult too.

5 Laura Whitmore: ‘I’ve had enough of being trivialised and gossiped about’