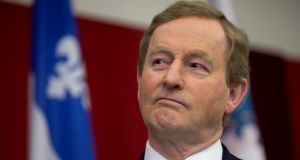 Taoiseach Enda Kenny during his visit to Canada on May 4th. Photograph: Reuters/Christinne Muschi

Fine Gael will be unable to hold a leadership election until the autumn if Taoiseach Enda Kenny does not stand aside in early June, party colleagues have said.

Party rules on membership renewal dictate that if a new leader is not in place by July 1st, it will mean that the “membership electorate” eligible to vote in the leadership race will be those registered for 2017-2018, rather than 2016-2017.

This administrative change could take between six to eight weeks to process, said one TD who has studied the rules, effectively pushing the election date until the autumn.

The deputy said the effective deadline for the Taoiseach to actually stand down is June 8th.

Under party rules, the leadership campaign must take place within 21 days. The electorate is comprised of three colleges: TDs, Senators and MEPs, who have 65 per cent voting strength; county councillors (10 per cent) and the party’s 25,000 members (25 per cent).

That June 8th deadline would be the latest that would allow a new leader to be appointed by July 1st, ahead of the date for membership renewal.

While all but one of a dozen Fine Gael TDs and Senators contacted by The Irish Times expect Mr Kenny to announce his timetable for departure next week, some supporters of leadership front-runners Simon Coveney and Leo Varadkar remain sceptical about his intentions.

Earlier this month, there were expectations that Mr Kenny would outline his timetable for stepping down soon after his return from his visit to Canadian prime minster Justin Trudeau last week.

However, there was a near-unanimous view that it will not happen this week because of the visits to Ireland of the EU’s chief Brexit negotiator Michel Barnier (he addresses the Dáil on Thursday) and of Prince Charles on Friday.

“The Taoiseach will not want an internal Fine Gael matter to interfere with those two important visits,” said one colleague.

Mr Kenny has refused to address the issue when questioned by reporters in recent weeks, giving a terse response to a question about his leadership when it was put to him during his visit to Canada last week.

Those close to Mr Kenny have privately refuted the contention that he was annoyed or angered at the question being put, claiming there was no rancour involved other than him expressing the opinion it was not an appropriate question to put on that particular occasion.

Both have been travelling throughout the State over the past week addressing constituency meetings and both have their full teams in place.