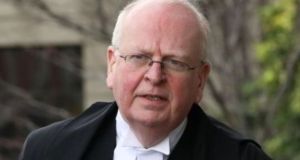 Independent Senator Michael McDowell re-iterated his call for a legal majority on the commission to appoint judges. file photograph: Collins

A renewed attempt to ensure legal representatives are in a majority on a new commission for the appointment of judges has been rejected by 15 votes to nine in the Seanad.

It was the first vote in the latest debate on the controversial Judicial Appointments Commission Bill which covers the process of appointing judges.

The Bill was last debated in the Seanad in July and has been the subject of a marathon debate of more than 100 hours, ending with the passage of the committee stage.

At the time Minister for Justice Charlie Flanagan said the Bill needed a “substantial amount of work” and has been delayed for four months until Tuesday when it was re-introduced with 78 amendments, 36 from the Government.

The Bill, championed by Minister for Transport Shane Ross, has been the subject of one of the longest filibusters of legislation in living memory.

When it returned to the Upper House on Tuesday night the first vote taken was on an amendment introduced by Independent Senator Michael McDowell who re-iterated his call for a legal majority on the commission to appoint judges.

He said he had never heard a good argument for a lay majority on the commission.

The stress on a lay majority was a claim that having a legal majority would seek to “subvert the common good by making choices that would not be for the public good”, he said.

And he said that by making the lay element of the commission a different type of person than a judge “it is more likely that such a commission would make inferior recommendations to the Government”.

After Mr McDowell’s amendment was defeated by 15 to nine in an electronic vote, a walk-through vote was called where Senators moved through the ‘Tá’ and ‘Níl’ lobbies. It was again defeated, this time by 15 votes to eight.

He also introduced an amendment to allow both Houses a final say after the next general election on whether they actually want the Bill to become law.