Mo Mowlam: Irish first impressions of her were largely negative 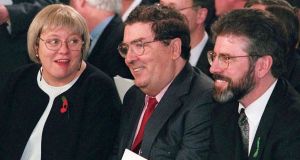 First impressions of Mo Mowlam as the UK Labour Party’s spokeswoman on Northern Ireland were not enitirely positive, with one senior British official recording a “lack of enthusiasm” in his Irish counterpart.

Previously confidential files released today in Belfast include a colourful account of a lunch in 1997 hosted by the Joint Anglo-Irish Secretariat for Mowlam, just months before Labour’s general election win landed her the role of Northern secretary.

In a note to Quentin Thomas, assistant head of the Northern Ireland Office (NIO), dated March 3rd, 1997, Peter Bell of the NIO commented on the attitude of the Irish secretary, David Donoghue: “What has surprised me is the lack of enthusiasm Mr Donaghue has evinced for Dr Mowlam generally.”

He felt that Donoghue’s views were representative of thinking in the Department of Foreign Affairs and added, “He does not like the lady. She is, for instance, ‘flaky’.’ Neither she nor her party is seen as pro-nationalist.”

In a further memo to officials, Bell, under the captivating headline Snog of a Lifetime, describes a lunch hosted by the joint secretariat for Mowlam at Maryfield in March 1997.

Mowlam was accompanied by her adviser, Nigel Warner, and was entertained by Bell and Ciaran Dowling, an Irish member of the secretariat. He added sardonically: “It is not quite clear whether other members of the Irish side were absent on orders, because they were frightened of missing the plane back to Dublin, or because they simply couldn’t be bothered. A bit of all three, it seems.”

According to Bell’s account, Mowlam made a number of important points in her opening statement, including that “the balance of change in NI was in a nationalist direction” and “a Labour government would support an inclusive talks process – indeed, it would make particular efforts to bring Sinn Féin in” but “they were no less attached to the principle of consent (unionist, not simply nationalist) and recognised the need to take unionists with them in a negotiated political settlement”.

Over lunch the NIO man had sought to impress on the Irish official “Dr Mowlam’s clear drift that the Irish should expect a Labour government to work with all the political parties, including the unionists”.

Mowlam had made several political points, including that she expected the “partisan” policy at Westminster “to collapse within two days of a new Labour government, in part owing to the ‘natural affinity’ between Conservatives and unionists”.

In conclusion Bell expressed satisfaction with the meeting: “The note which I hoped Dr Mowlam would strike – a constructive relationship with the Irish, but do not expect a Labour government to follow a simplistic nationalist agenda – was struck.”

He added: “You will also wish to note that Dr Mowlam prefers doing business ‘dry’, to be followed … by a not necessarily wholly teetotal entertainment: work first, pleasure later.” This brought him to what he termed “the osculation”: Dr Mowlam had opened proceedings at the lunch by presenting the Irish and British officials with a “Comic Relief kissing kit”.

Though Bell had reported the apparent Irish antipathy towards Mowlam in March, by the following month, April 1997, he appeared concerned about the closeness of the relationship between Dublin and Mowlam’s special adviser.

After a meeting in London, Bell reported that he was interested to hear Warner state that he had “good relations” with the Irish and “warned him gently” that while his wealth of contacts would be assets for his new role in government, “on the other hand it would be intolerable if the Irish (or anyone else) tried to play him (and through him the secretary of state) off against the government machine in the broadest sense. One of the jobs of permanent secretaries, I hinted, was to prevent such embarrassments arising”.

Bell concludes his thoughts by adding “(Very definitely I think we should follow President Johnson’s advice and seek to bring Mr Warner into the tent; he may become a handy paper and speech writer if nothing else.)”