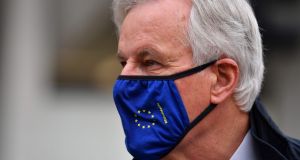 EU chief negotiator Michel Barnier: Britain seeking to “allow the UK to source goods from around the world and export them, with very little alteration to the EU as British goods, tariff-and quota-free” Photograph: Ben Stansall

EU and UK negotiators are locked in tense negotiations trying to find a compromise to avoid products made of mixed ingredients from the Republic and Northern Ireland being locked out of crucial export markets in a few weeks’ time.

Products such as Baileys, whiskey, beer, cheddar cheese and infant formula have traditionally been made of ingredients from across the island.

An agreement is needed so such hybrid goods can be certified as “EU origin”, and continue to be treated as such in exports around the world. As it stands, after Brexit, goods originating in the North will be considered “third country” products and therefore not eligible for acceptance as EU goods in the bloc’s existing free trade agreements, such as with Canada.

The European Commission has proposed ingredients from both the UK and EU could continue to be used together, without the final product losing its origin status as a result, under a so-called bilateral cumulation agreement.

This would allow dairy firms to continue to blend milk from both the Republic and North, and continue to seamlessly sell into territories covered by the EU’s 40 free trade agreements, as well as into Britain on preferential terms.

However, Britain has pushed for what is known as a diagonal cumulation: an arrangement that would allow for ingredients from multiple countries including other non-EU states to be mixed together into a product that would then be labelled as UK in origin.

The EU fears this could open a hole in the side of the single market, leading to a stand-off in the talks.

Chief EU negotiator Michel Barnier has described Britain’s proposal as a bid to become “an assembly hub for the EU” that would “allow the UK to source goods from around the world and export them, with very little alteration to the EU as British goods, tariff-and quota-free”.

MEP Seán Kelly, Fine Gael’s leader in the European Parliament, said it was vital an agreement on rules of origin was part of a deal to allow cross-Border supply chains continue without disruption on the island of Ireland.

“People are suffering with the economic damage already caused by the pandemic; it is up to Boris Johnson to ensure that further unnecessary hardship is not placed on ordinary people and businesses by coming to the negotiating table in good faith with realistic proposals during this final hour,” Mr Kelly said.