‘Northern Ireland’s business community will not be ready for January 1st, quite simply’ 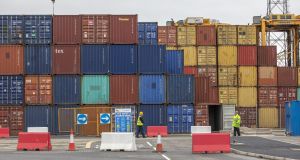 Northern Ireland business representatives have called for an implementation period for the Northern Ireland protocol, telling MPs they were being given six weeks to prepare for changes that would usually require two years.

Stephen Kelly, chief executive of Manufacturing NI, said that without a grace period agreed between Britain and the European Union, the protocol would not work.

“Northern Ireland’s business community will not be ready for the first of January, quite simply,” he told the House of Commons Brexit committee.

Victor Chestnutt, president of the Ulster Farmers’ Union, said most farmers were unaware of the paperwork they would need to import machinery or agri-products, partly because of a lack of clarity from the government.

“With six weeks until the day, it feels like we’re going forward with both arms tied behind our back and a blindfold on. You know if you give us clarity and give us time, we will get through it. But we do need an implementation period or honeymoon period,” he said.

“We have a transition period but we do not know what we are transitioning to with six weeks to go.”

Changes required by the Northern Ireland protocol are due to come into force on January 1st, regardless of the outcome of talks on a free trade agreement between London and Brussels. A joint committee of officials from Britain and the EU have been working out the details of how to implement the protocol, but they have yet to agree on some important issues such as which products coming from Britain into Northern Ireland should be regarded as at risk of moving across the Border into the EU single market.

“Those are still subject to discussion and need to be agreed with the EU. There are real-world consequences for businesses and consumers if they are not, which we believe would be contrary to the intentions of the protocol. We have agreed with the EU to intensify the process of engagement, to resolve all outstanding issues,” minister of state for Northern Ireland Robin Walker told the House of Commons.

Aodhán Connolly from the Northern Ireland Retail Consortium said a no-deal outcome to the trade talks would affect the North’s food exports to Britain, 60 per cent of which go through Dublin Port. He said a cottage pie had nine border movements and Bailey’s Irish Cream had five.

“It’s a cyclical, circular, integrated supply chain across these islands,” he said.

Earlier, Northern Ireland’s Minister for Justice Naomi Long told MPs that a no-deal outcome would create a bonanza for organised crime gangs on both sides of the Border. She said the loss of the European Arrest Warrant would return extradition to the conditions of the 1950s and Britain and the EU needed to agree a new security partnership.

“Even if they do, it will not have the same breadth of measures to which we currently have access, the outcome will be sub-optimal unless we have the same access to current IT systems, legal instruments and EU agencies that we currently enjoy,” she told the Northern Ireland Affairs Committee.