Chris Johns: A political dogfight grips London, but what, exactly, are they fighting about? 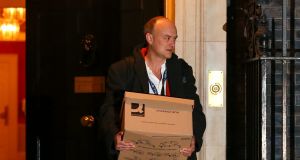 According to leading Brexit commentator Prof Chris Grey: ‘Cummings is a type, very familiar in business … not as smart as they think; geek-macho; too impressed by pop-science … going from job to job leaving a trail of destruction for which they never have to take responsibility.’ Photograph: Hollie Adams/Bloomberg

Panto season has started early in the UK with a political dogfight in Downing Street. A row that has gripped political anoraks and dominated the headlines. Yet no one has actually managed to explain what it is all about. As entertaining as a pantomime but as lacking a coherent plot line. What, exactly, are they fighting about? The politics are poisonous because the policies are so incoherent.

Anyone who has ever run a family, a business or a country knows both how hard it is and, if they are honest, how unqualified are many of the people who end up in leadership positions. Imposter syndrome, rightly, afflicts many a senior executive or minister. We expect a lot by way of credentials from those who build our homes, bridges and hospitals; bus drivers are expected to be licensed; we will demand some form of professional training for those who administer the coronavirus vaccine.

By contrast, the dirty secret of many businesses is that more than a few of the the people sitting in the C-suite got there without possessing any obvious qualifications. Old-fashioned nepotism or just being in the right place at the right time contribute to many success stories. Research shows that being tall helps, along with things such as accent, social connections and going to the right school or university.

The doyen of Brexit commentators, Prof Chris Grey, had this to say about the Downing Street saga: “Cummings is a type, very familiar in business . . . not as smart as they think; geek-macho; too impressed by pop-science . . . going from job to job leaving a trail of destruction for which they never have to take responsibility.”

Others have compared the havoc to a Hilary Mantel novel, with Johnson in the role of Henry the Eighth and his fiancee, Carrie Symonds, playing Anne Boleyn – in the sense of trying to run things behind the scenes, rather than in terms of that story’s unhappy ending. Not yet anyway.

You don’t need a licence or a professional qualification to be a parent or a prime minister. We all suffer the consequences when amateurs and bluffers make important decisions on our behalf. Too many of the executives at the top of financial institutions revealed themselves to be hopelessly out of their depth when the financial crisis hit. We’ve all met the senior manager who inspires wonder – but only in the sense that everyone wonders how on Earth they got to the top.

Management quality, or the lack of it, has long been fertile ground for comedy writers. The Office, Yes Minister and Fawlty Towers are just three examples. Economists haven’t devoted as much time as comedians to the study of management but Nicholas Bloom and John van Reenen of Stanford and the London School of Economics are among those who are trying to rectify that. Bloom and van Reenen argue that economists have not been interested in management for two reasons. First, there isn’t much hard data and, second, if management varies in quality, it shouldn’t be that hard to make it better. If the gains in productivity and profits from installing better managers are so great, it would, according to orthodox economic theory, have already happened. And we wonder why people tell economist jokes.

The starkest finding is that there is incredible variation in management quality within industries and between countries. The productivity puzzle that exercises so many economists might be at least partly explained by the fact that a few firms are very well managed and that a long tail of poorly managed businesses drags the overall numbers down. American firms are the best managed internationally, although even there it depends partly on how much competition there is. Large multinationals are typically very well managed and often transplant their practices into their countries of operation. Government-owned firms are typically poorly managed. Owner managers that create dynastic succession store up trouble for the future.

At the heart of all this is amateurism. Anybody can have a go at running a country – and they too often do

There is lots to take away from this kind of research. What stands out, for me, is the persistence of poor management – globally. That point about replacing low-quality managers with top performers is fascinating. The problem appears to be that it is really hard to spot top managers in advance. Despite the abundance of business schools it is less than obvious that best practice is easily identifiable or transferable. And what is true for business seems to be even worse in politics – the electoral cycle too often replaces one low-quality bunch of chancers with another.

All of this can only be made worse if an organisation deliberately downgrades the role played by expertise. It’s a game of probabilities: the chances of success must be maximised by at least trying to get the best people in the right positions. Boris Johnson and Donald Trump fill key management positions solely on the basis of loyalty rather than competence. They keep as far away from experts as possible. Nobody who has been paying attention should be surprised by the results.

At the heart of all this is amateurism. Anybody can have a go at running a country – and they too often do. Good leaders, whether executives or politicians, surround themselves with talent. Weak, narcissistic, insecure prime ministers and chief executives fear the expert. The chaos in Downing Street is reminiscent of similar disorder in the White House. Biden promises the restoration of the expert. Johnson gives us only restoration comedy.

6 Investors eye purchase of €78m worth of Dublin logistics assets