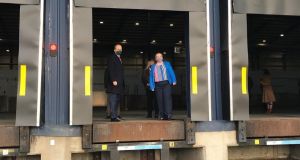 Taoiseach Micheal Martin during a visit to Dublin Port to meet with officials from the Department of Agriculture, Department of Health and the Office of Public Works to view the work taking place ahead of Brexit. Photograp: James Ward/PA Wire

Taoiseach Micheál Martin has expressed concern at “complacency” among some small businesses over their failure to prepare for Brexit and the significant new customs for trade with Britain from January 1st.

Mr Martin described the UK’s exit from the EU, coming into effect at the start of next year, as the most significant fundamental economic change facing the country in more than 50 years.

Speaking on a visit to border inspection facilites at Dublin Port, the Taoiseach said there will be “very significant” changes in 39 days regardless of whether the EU and UK agree a trade deal.

“Even if we have a deal, the implications for businesses and companies will be significant,” he told reporters at the Department of Agriculture’s border control post at the State’s busiest port.

Mr Martin said that the Government had “concerns” that some small and medium-sized businesses were not “getting ahead of” post-Brexit trade arrangements coming into effect.

Some businesses wrongly believed that they would not have to make any changes and that “everything will be okay” if the EU and the UK agree a trade deal before the end of the year.

“The world will change and it will not be as seamless as it once was,” he said.

The Taoiseach said that he was “hopeful” that there would be the “outlines of a deal” between the EU and the UK by the end of this week but a deal was down to “political will”.

Mr Martin said that “moves will have to be made” to reach agreement on the outstanding issues offishing and “level playing field” measures to prevent undercutting in competition.

“In all negotiations, it comes to a crunch point and solutions to those crunch issues have to emerge,” he told reporters.

European Commission president Ursula von der Leyen gave an upbeat assessment to EU leaders last week and there were now texts on all areas within the agreement, he said.

Asked whether he was confident dispute resolution mechanisms in any deal would work, Mr Martin said that building trust would be the most important issue after any deal is agreed.

He said a deal made “far greater sense” for jobs and the economies of Ireland, the UK and the EU.

Asked whether Irish businesses not prepared for deluge of new customs declarations could expect a grace period for form-filing, Mr Martin said: “The bottom line is you need to get ready.”

The Taoiseach said there was still time for businesses to get ready by the January 1st deadline.

“We have had a transition year period so people just need to knuckle down now,” he said, urging businesses which import and export to UK to engage with State agencies on preparations.

In response to the concerns of shipping firm Stena Line on post-Brexit gridlock from checks at Dublin Port, Mr Martin said that the Government was continuing to increase capacity at Dublin Port but that Brexit was going to change how Ireland does business with the UK.

“It is a fundamental change and people need to get that into their heads. That which ordinarily went through here seamlessly will not go through seamlessly now,” he said.

The volume of customs declarations that businesses will have to fill out annually for trade with the UK will increase from 1.5 million to 20 million, he said.

“Businesses have got to get it into their heads that life will be different, unfortunately,” he said.

Mr Martin said that it was a “worry” that there had been a lack of preparation for post-Brexit border checks in British ports on other side of the Irish Sea, Liverpool and Holyhead.

He encouraged businesses to trial direct ferry routes to Europe as alternatives to transporting goods through Britain over the so-called landbridge.

Mr Martin said that he was confident that the EU and UK could resolve concerns raised by Northern Ireland’s political leaders about any food shortages from Irish Sea post-Brexit checks.

Regardless of the outcome of the ongoing EU-UK trade negotiations, the UK will leave the EU single market and customs union on January 1st, resulting in new customs, regulatory and food and animal health checks coming into effect from the start of next year on any goods imported from, exported to or transported through Britain.

He also visited Terminal 10, the largest State facility at the port where physical inspections will be carried out on lorries transporting goods and where detained goods will be held in temperature-controlled storage.

Also on Monday the Tánaiste and Minster for Enterprise, Trade and Employment Leo Varadkar opened a new loan scheme for small businesses to help them prepare for Brexit.

Businesses will be able to borrow up to €25,000 at a low interest rate for between six months and three years if their turnover has or is likely to fall by 15 per cent or more, or if the business has short-term cashflow needs as a result of Brexit.

To be eligible for the Microfinance Ireland Brexit Business Loan scheme, businesses must have fewer than 10 employees and annual turnover of up to €2 million.

Sven Spollen-Behrens, director of the Small Firms Association, said the loans would help small businesses make preparations for “what could be some very difficult weeks and months ahead.”

He said the extension of this new loan scheme to alcohol producers would help small distilleries and microbreweries given that the drinks sector is heavily reliant on the UK market.