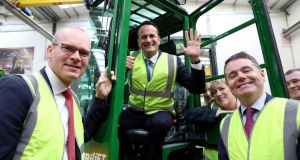 Leo Varadkar is parading his elite team of Presentables around the country, holding them up to be universally admired and then putting on the frighteners by threatening everybody with Micheál Martin, Seán Haughey and a dull assortment of Fianna Fáil dynamos.

At Fine Gael’s campaign launch in Monaghan, the Taoiseach joined fellow Brexit superstars Simon Coveney and Helen McEntee on the platform and modestly invited the world to luxuriate in the light of their combined presence. With a light garnish of Paschal the Paragon to gild the experience even more, it was quite the show.

The event was held in a forklift factory – high-vis heaven for electioneering politicians. Local TD Heather Humphreys was also on hand to show the anxious Taoiseach how to sit into the cab of a Combilift without falling out or, worse still, looking like a culchie.

The Presentables are an elite squad of Ministers the boss feels he can take anywhere in the course of the campaign to make Fine Gael look good. They are also unlikely to make a show of him or say the wrong thing – which is more than can be said for the Taoiseach, who made an ill-judged remark to journalists about a serious accident involving a homeless man in Dublin. It came across as political, like he was trying to tie Dublin’s Fianna Fáil lord mayor to the incident. To make matters worse, a photograph of the scene of the incident showed a poster for beleaguered Minister for Housing Eoghan Murphy on a nearby lamppost.

The comments shifted focus from the message in Monaghan and knocked the carefully upbeat optics out of kilter.

This is what happens during campaigns. “We do the best we can to manage the launch, but once it slips into open water anything can happen, no matter how well we prepare,” commented a Fine Gael handler before the gaffe, as he watched a relaxed Taoiseach and his shiny Presentables make their way down for their short press conference.

It didn’t take long before his point was proved.

Back to Leo’s A-team, although in fact they are really his B-team (much-lauded and well-connected fellow Brexit specialists). They represent the party’s not-so-secret weapon. Minister for Finance Paschal Donohoe is an honorary member because he ticks all the cuteness boxes, from dimples through to sugar-coated street smarts.

Heather, a safe pair of hands, was co-opted for the day.

One after the other, they took to the microphone in the very impressive global headquarters of Combilift and enthusiastically extolled each others’ virtues.

“Helen, Leo and I have criss-crossed Europe for the last two years,” quivered Coveney.

But it is only “half-time” in the Brexit long game. “Half-time” is the sporting metaphor with which Fine Gael is going to beat the electorate senseless over the coming weeks. And Brexit, they insist, is most definitely a game of two halves.

So who should Ireland choose to play on?

The Taoiseach turned at the lectern and his gaze fell on the great Presentables.

“This team,” he said solemnly.

He looked along the platform, but he didn’t look back. Remember the slogan? “A future to look forward to, hi”, as the Monaghan version might go. Or #LookForward, as plastered all over the backdrop.

Expect ripping yarns of continental derring-do until polling day and, if the launch is anything to go by, shameless EU name-dropping of your Junckers, Barniers, Tusks and Von der Leyens, with whom they are very well got.

Meanwhile, Leo reminded everyone he’s getting along very well with the UK prime minister, which is very important in the long run. Helen McEntee got in on the act, mentioning “of course, our very own commissioner, Phil Hogan”.

Leo, Simon and Helen “are togged out and ready to go”, gurgled Heather, unlike the other crowd’s “junior B-team”.

Fine Gael and Fianna Fáil are in a fight to the death, so the Presentables and their leader wasted no chance to take a cut at their main rivals. There was a spirited outbreak of Billy-bashing, with swipes at Fianna Fáil’s “only MEP” and his comments about the EU-UK withdrawal agreement.

“Of course, thankfully, Fianna Fáil doesn’t have that much influence in Europe, and as a result the withdrawal agreement will pass through the European Parliament before the end of the month,” dripped Leo, scathingly.

Imagine if Micheál Martin, Seán Haughey and Lisa Chambers had been handling the negotiations, he asked.

“Would they have done a better job? I don’t think so.”

Heather Humphreys was surrounded by fancy forklifts and she couldn’t have been happier. In between spouting the obligatory sporting metaphors, she spoke of attending international trade missions with the company.

“Of course, one of the highlights was sitting on a Combilift in Park Avenue as the whole town of New York looked on,” she cooed, misty-eyed, as we wrestled with the image of her perched atop a piece of industrial machinery and rolling through the streets of Manhattan.

At the first opportunity she climbed into a Combilift cab.

“Oh, Heather is a hoor for the hydraulics,” chuckled a local. “She’s the only one who knows how to drive the thing,” said a handler. “How will we get her down from it?” fretted another.

No bother. And before long, Leo was climbing up into the cab of “a low material handler that goes in all four directions”, which sounded like a job description for a party press officer.

“It’s quite spacious!” he marvelled, hitting the wheel like a five-year-old at the Ploughing with his daddy. Don’t tell Eoghan Murphy, we thought, or he’ll have it let out as a boutique apartment in no time.

On so to Virginia in Cavan for the Taoiseach’s first walkabout among the ordinary people. He was there to open the constituency office of candidate TP O’Reilly – “TP for TD”. He made a speech on the steps of the building, promising the town a new bypass, something Fianna Fáil wouldn’t do.

He is trying hard to improve his canvassing technique, and has definitely improved. But he will never be a natural flesh presser. He is trying very hard though. He even ate half a rich tea biscuit when a plate of them was offered.

There was a scrum inside the office, which had big scented candles burning for the occasion. The crowd was very male and not exactly in the first flush of youth (apart from a large contingent of excited schoolkids).

Fine Gael is trying hard to win a second seat in the constituency. As the Taoiseach met a group of women who wanted to highlight the pay and conditions of childcare workers, a local party worker pleaded with the candidate to “push in there! Push in there! Get in there onto his shoulder!”

In the local pharmacy, the Taoiseach met the owner, Brian O’Donoghue, but then asked: “Can I meet the staff?” Perhaps it was noticed that he didn’t talk to any workers at Combilift during his tour – unlike his predecessors who would have been shaking the arms off them.

Loyola Arnold in T Arnold and Sons hardware and shooting supplies was amused by all the activity. Normally the area only gets media attention when ATMs are robbed, she remarked with a smile. Over in Brady’s drapers, Leo ran in to say hello to the lady behind the counter.

What did she think of the visit? “I couldn’t care less.”

Then it was into Micheál McEneaney’s butchers. He didn’t stay long. “Craft butcher!” boomed TP O’Reilly, as Leo looked a bit lost among the trays of red meat. There was an awkward silence as he looked at the sirloin steaks and gigot chops. “Oh, chicken goujons,” muttered the Taoiseach at the freezer cabinet as he left.

“He’ll not be doing me much good, not eating the meat,” shrugged Micheál.

Finally, the Taoiseach bade Cavan farewell at the steps of the constituency office.

He waved and went to his car. It was a bit quiet.

Day one done. One fiasco down.

And despite all that effort, nobody wanted to talk to him about Brexit.