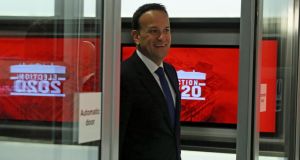 The Republic has the most progressive tax system in the European Union in terms of delivering income equality, according to a study by the Economic and Social Research Institute (ESRI).

However, the report has dealt a blow to Fine Gael proposals to ease the tax burden on middle-income earners by raising the entry level to €50,000 for a single person and to €100,000 for a double-income couple.

While not referring to the Fine Gael proposals specifically, the ESRI has calculated that these changes – due to be phased in over five years – would increase income inequality by shifting more income from high earners into the lower, standard-rate band.

The changes, it said, would move the Republic from being the 13th most unequal state in the EU in terms of household income to the 10th, on a par with the UK.

As the tax regime stands, the entry point at which earners pay the higher 40 per cent rate of income tax (€35,300) is just 10 per cent below the average industrial wage.

The number of workers paying income tax at the higher rate has more than doubled since 2010 to just under 600,000.

Fine Gael made easing the tax burden for low- and middle-income earners a central plank of its programme for government when elected in 2016 but was forced to forgo planned changes to the income tax code in the last budget because of Brexit.

A Fine Gael spokesman confirmed on Wednesday that increasing the entry point to the top rate of income tax was still a central aim.

The ESRI’s study found that while the distribution of household income in the Republic before taxes and benefits is the most unequal in the EU, the State’s “highly progressive” tax system substantially offsets this, bringing inequality in take-home income very close to the EU average.

The inequality in income before taxes and benefits is explained by the high proportion of working-age households in Ireland without any market income rather than a disparity in wage rates.

The report found that no other tax system in Europe did more to reduce household income inequality than that of the Republic.

“Before taxes, inequality in Irish household income is much higher than the EU average. But our tax system does more to reduce this than any other country in Europe, ” the report’s author Barra Roantree said.

“Two particularly progressive features of our tax system are the broad-based USC and the early level that the higher-rate of income tax kicks in. Together, these bring the level of inequality in take-home income very close to the EU average,” he said.

The report also found that inequality in income before taxes and benefits in Ireland has increased over the past 30 years with the top 10 per cent of households here now taking home more than 2.6 times the income of the median – or middle – households.