Launching its manifesto in Dublin, Sinn Féin promised action on housing, healthcare and 'putting money back into working people's pockets', along with a referendum on Irish unity. Video: John Cassidy 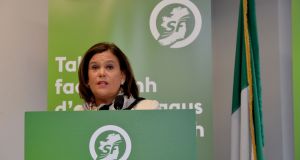 One was a large sculptural piece, the other a Labour Party triptych.

Sinn Féin chose upstairs in the Temple Bar Gallery and Studios for the long-awaited launch of its manifesto. Presumably the venue was selected so Mary Lou McDonald could fly up to the unveiling on the Sinn Féin election unicorn, which has been delighting voters all over the country, particularly the young.

The party’s Everybody Can Have Everything manifesto was not short on promises. With a four-page table of contents directing the way to 108 pages of great things to do, there was a certain “never mind the quality, feel the width” appeal to it.

To get to the room where the event was taking place, people had to pass Tragodía, the “atmospherically saturated sculptural installation” by Turner Prize-winning artist Tai Shani. It took up most of the ground floor. There were coiled snakes, cosmic eggs, crystal balls and pointing fingers. Two of the fingers nearest the door were trying to get into a big pie, but that might just have been us transferring emotion after two weeks watching politicians trying to get elected.

There was also a virtual reality play, an experimental narrative set in an infinite celestial expanse. This required putting on goggles and retreating into your own head. We regretted not taking the goggles upstairs for the installation of the manifesto, in which Mary Lou was flanked by the two undisputed works of art from her front bench: finance spokesman Pearse Doherty and housing spokesman Eoin Ó Broin.

Her twin treasures were there to be admired and listened to, because these two boys can talk finance and housing.

Eoin even wrote a book on his subject. You could listen to Eoin talk insulation forever, which we nearly did on Tuesday in Temple Bar.

As for their party leader, it’s been lovely in the past couple of days to see her coming out of her shell and being more assertive having been kept silent so long by a hostile media and “misguided” TV organisations during this campaign. Some might reasonably say Mary Lou isn’t entitled to be in a debate set up between candidates most likely to be the next Taoiseach. The Fine Gael and Fianna Fáil leaders have a legitimate claim to the job but the leader of Sinn Féin, with a mere 42 candidates in the field, is not in the running.

People are looking for change, says Mary Lou. “People are telling me that right across the country and I think the debate needs to reflect that.

“Let me say this: if it were a thing, I believe that any other party, if it weren’t Sinn Féin, any other party with 22 Dáil deputies was excluded from the big debate in the final week of the campaign by the national broadcaster, I think that many eyebrows would be raised. In fact, I would say the issue wouldn’t arise but for the fact that it happens to be Sinn Féin.”

A couple of the more interesting items from the manifesto include a pledge to aim for 20 Olympic/Paralympic medals for Ireland in the 2024 Paris Olympics, a weekly €42 rise in dole payments, a right to retire at 65 and cutting politicians’ wages. In promising the salary cuts, Pearse Doherty held out a dilemma for the lazy electables around Leinster House, of whom there are few.

Everyone around Leinster House knows that being a senator is a doddle compared with the job of TD. The workload is lighter for those more suited to overseas trips than senatorial duties, the hours are considerably shorter and if a senator wants to do nothing, nobody really notices. Doherty has suggested capping a TD’s salary at €75k and a senator’s wedge at €60k. At that rate, a gig in the Upper House might be more advantageous as it comes with lots of free time to bump up the take-home with a real job on the side.

With McDonald, Doherty and Ó Broin doing the talking, it was a lengthy launch. But there was much to say, Sinn Féin having done far less thus far in terms of policy events than its rivals. Instead, strong campaigner Mary Lou has been garnering soft coverage around the country on the campaign trail while her party loudly puts it about that she has been hard done by the establishment media. The production of an ambitious manifesto by the party’s three best performers injected a necessary heft into the offering.

All in all, another very good day for Sinn Féin in what is turning into a very promising election.

The same can’t be said of the Labour Party. Its manifesto launch was baffling in the line-up of personnel chosen to join Brendan Howlin for the occasion. Where Mary Lou stood with her two best communicators on the two most pressing issues for the electorate, Brendan was surrounded by aging stalwarts, a couple of unknown new candidates and an outgoing Senator who isn’t running for the Dáil.

Who, in heaven’s name, thought it would be a good idea to front up the launch with former leader Joan Burton (70) standing on one side of Brendan Howlin (63) and former TD Joe Costello (74) on the other side? All good people and none of us are getting any younger, but a party looking to the future and trying to woo voters clearly looking for change might have considered a more dynamic look for the line-up.

Where were the likes of Alan Kelly, Cllr Rebecca Moynihan, Ged Nash and Aodhán Ó Ríordáin? Four candidates managed to make the doughnut around the leader – Juliet O’Connell, who is running in Dún Laoghaire, Cllr Annie Hoey (Meath East) and Paul O’Brien (Wicklow). Senator Kevin Humphreys (an old hand running in Dublin Bay South) was also in the line-up along with director of elections Senator Ivana Bacik.

A party member explained to us that Paul O’Brien was the replacement for former Siptu boss Jack O’Connor. Jack is the same age as Brendan Howlin, so at least the addition of O’Brien lowered the average age of the platform party on the day.

Labour is campaigning hard on one of the biggest issues to emerge during the election – the plan to raise the pension eligibility age. The party leader gave “a cast-iron commitment” to freeze the State pension age at 66. Although if people want to work on, they should have the right to do that too. “I honestly believe we must give choices to people and not be ageist about that,” said Brendan.

The launch took place in the very nice Iveagh Garden Hotel in Dublin’s Harcourt Street, in a back room where the lights were low and night-time fairylights twinkled in swags of artificial ivy on the wall behind the party leader and his colleagues. The bar in the corner was closed, but the shutters were half open – a bit like Labour’s prospects.

With half a chance and a half-decent showing, the party and the evergreen Howlin could yet return to power.

A major installation yet to be completed.