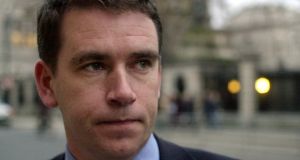 Fine Gael TD John Deasy has implicitly criticised how the leadership of his party has handled what he sees as issues with the Waterford Fine Gael organisation. Photograph: Cyril Byrne

A motion of no confidence in Fine Gael TD John Deasy was put forward by a brother of his party colleague and constituency rival Senator Paudie Coffey, The Irish Times has learned.

The motion was passed at a meeting in Dungarvan on Monday evening, which was attended by Mr Coffey, who voted in support of the motion and spoke to the meeting following the vote.

Mr Coffey told The Irish Times the issue is “not a Coffey versus Deasy thing... that’s not true, in any sense. This came from the membership”.

He did, however, criticise Mr Deasy’s record as a public representative for Waterford.

“He hasn’t attended meetings. Waterford Oireachtas members have attended numerous meetings with regard to one of the biggest issues in history locally, Waterford hospital. He attended one for five minutes.”

Mr Coffey said he had never heard of claims of bullying and abuse of members within the party, but would be following up on the suggestion.

He also criticised Mr Deasy’s support of local election candidates and said he had not accompanied the Taoiseach or Ministers on visits to the constituency.

“All of that culminated in the frustration that has been felt by the members and that’s how they’ve expressed it, in a motion of no confidence.”

Earlier on Tuesday Mr Deasy hit back against the no confidence vote. Speaking to The Irish Times Mr Deasy said “the entire Waterford organisation needs to be stood down and reviewed by headquarters; repeated warnings have been given by myself and other with regard to the behaviour of individuals in Waterford for years now.”

Mr Deasy painted a picture of a constituency organisation at war with itself, saying his supporters had stopped going to meetings, such as that held on Monday night, years ago.

“This is well beyond typical inter-party, internecine rivalries,” he said. Mr Deasy also implicitly criticised how the leadership of his party had handled the dispute, saying: “Everyone in Fine Gael at the highest levels understands what’s been going on in Waterford for years, but have continually ignored it.”

At a Fine Gael constituency meeting in Dungarvan on Monday evening, which is Mr Deasy’s constituency, a reported 60 members of the party comprising councillors, candidates and members voted for the motion expressing no confidence in him.

Sources who attended the meeting said the motion, proposed by a non-elected member of the party, received near unanimous support from members present at Lawlor’s Hotel.

They said there was general dissatisfaction with aspects of Mr Deasy’s performance both on the ground and in national politics.

“I don’t think he’s very interested in continuing in public life,” one source said, adding Mr Deasy had not sent an apology to the meeting, which the TD did not attend.

One source said that the no confidence motion would be the subject of a meeting in Fine Gael headquarters in Dublin early next month.

Mr Deasy has been a TD for the constituency since 2002, having succeeded his late father, Austin.

Since 2017 he has been the Irish Government’s special envoy to the US Congress, where he has worked on issues such as achieving status in the US for undocumented, or illegal, Irish immigrants.

Since then Mr Deasy has been largely absent from the constituency. He was one of a small number of Irish politicians and diplomats invited to Doonbeg for dinner, when US president Donald Trump visited Ireland earlier in June.

Fine Gael in Waterford has been riven by a long and bitter party rivalry between Mr Deasy and his colleague, Senator Paudie Coffey.

Senator Coffey, from Portlaw, was selected as the sole Fine Gael candidate for the next general election at a selection convention in December 2017. Mr Deasy did not put his name forward at the convention. Media reports suggested the demise of his career were rebuffed by him at the time.

Fine Gael’s general secretary Tom Curran will soon be consulting with members and elected representatives in Waterford on finalising the party’s General Election ticket for the constituency.

There was an expectation Mr Deasy’s name might be added to the ticket by party headquarters. However, he has remained tight-lipped about his future plans since then.

However, Monday night’s decision might complicate that decision. Members voted no-confidence in him as a Dáil deputy and also as a prospective candidate for Fine Gael.

It is not know how many, if any, supporters of Mr Deasy attended the meeting.

Boy (5) who died in farm accident in Co Roscommon is named 18:05
Surge in unemployment payments to more than 700,000 18:03
Coronavirus: 16 people have died in Republic bringing total deaths to 174 17:50
‘It’s a leap into the unknown, a real baptism of fire’ - medical students graduate early 17:30
Dáil to sit in Convention Centre if vote for taoiseach needed 16:58

1 Coronavirus: More ‘striking’ evidence BCG vaccine might protect against Covid-19
2 Coronavirus: 16 people have died in Republic bringing total deaths to 174
3 Genetics shed light on origins of Irish strains of Covid-19
4 Irish doctors on getting Covid-19: ‘In 90 minutes, I deteriorated quite rapidly’
5 Surge in unemployment payments to more than 700,000
Real news has value SUBSCRIBE