Mary Lou McDonald is caught between the old and the new 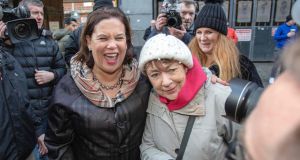 Mary Lou McDonald has an earthy appeal to both working-class and middle-class women. Photograph: Paul Faith/AFP via Getty

Karl Marx, whose spirit haunted this election, is usually good for a pithy soundbite. It is not enough to interpret the world, he famously wrote, you must change it. Were the great philosopher’s eye to be cast over the result of this election, he might amend the aphorism. It is not enough to change the world, he might say, you must also interpret it.

Because one thing is clear: few people know quite how to interpret the Sinn Féin surge. And that includes Sinn Féin.

Mary Lou McDonald was looking at a triumph of a preternatural order on Sunday: candidates whose names we did not previously know were topping polls; one candidate who spent much of the campaign on holiday topped the poll. Yet there she was, spotlit in the white heat of victory, and her normal implacability seemed thrown.

The people wanted “change”, she offered lamely by way of explanation. Pressed on what exactly had changed since Sinn Féin’s poor performance a mere nine months ago in the local and European elections, her normal oratorical skills and “rule of threes” deserted her. “We learned,” she said. Pause. Then, “We listened.” But to what? What followed was a party broadcast but without her usual punch.

We knew young people would vote for Sinn Féin. They think they know what it stands for: a new world order

Gerry Adams, interviewed immediately afterwards, didn’t attempt rhetoric. And he didn’t pull any punches. Their great result was down to the leadership of Mary Lou McDonald and Michelle O’Neill.

“Because this was a 32-county campaign,” he declared. And as if to prove the point, there was Michelle O’Neill by McDonald’s side, in gleaming white, as if on an Oscars red carpet. No shadowy figure here then.

It was a televisual moment; O’Neill pressing McDonald in comradely clasp, Adams on the screen in faraway Belfast. And yet it left an indelible sense of Mary Lou McDonald caught in a pincer-like movement.

Is there pressure on Mary Lou McDonald now to deliver a 32-county republic? Was that the real aim of this election for Sinn Féin? And what does she have to do to accomplish it?

We knew this election was about the misery of homelessness and hospitals. We knew it was about the hopelessness of Generation Rent, commuter hell, childcare nightmares – and the sheer savagery of finding 2½ grand every month for the unsecured roof over your head. Their scream seemed silent, but between the two housing spokespeople, Eoghan Murphy and Eoin Ó Broin, we know which one heard them.

We knew young people would vote for Sinn Féin. Unlike Generation Rent, young people across all classes have, for some time now, liked the idea of themselves as Sinn Féin voters. They think they know what it stands for: a new world order. Just as in Britain’s Brexit, nationalism flourishes between innocence and cynicism.

Activism can lead to strange places. Are the activists aware that many dictatorships were democratically elected?

The difference between Ireland and other countries is that our growing nationalism is a left-wing one, but the message is the same: your government isn’t listening, but we will put it right. The methods are the same, too.

Although Sinn Féin probably spent no more than Fine Gael on social media targeting, their presence there has grown exponentially. It has been normalised culturally through Facebook groups such as Ireland Simpson fans or exposure on platforms such as The Blindboy Podcast. Supporting Sinn Féin was even fun. But does that sound like Mary Lou McDonald?

Because the question is: how much of all this is down to her leadership? She has always had charisma and a unique ability to appeal across the class divide, particularly to women. Even her name helps. Like Boris Johnson, her first name is memorable and bestows immediate intimacy. She is Trinity educated but has an earthy appeal to both working-class women and polished middle-class women. Her mastery of the issues in the two big referendums – on marriage equality and the Eighth Amendment – copperfastened her feminist credentials.

There is a sense in which those two referendums bred a class of young activists who, having tasted the spoils of victory, found a new outlet in this election: voting Sinn Féin for the sake of rocking the establishment. Activism can lead to strange places. Are the activists aware that many dictatorships were democratically elected?

Sinn Féin have successfully equated modern oppressions against gays and women’s reproductive rights with past oppressions such as British rule, without taking responsibility for their own hand in oppressions like the savage treatment of victims such as Paul Quinn and his family

Two years ago, when she was elected leader, the wonder was how she, a middle-class woman from Dublin’s leafy suburbs, would handle the republican movement’s bloodstained legacy issues. Those same issues dogged the election campaign – she didn’t handle them well and they are not going to go away as the perpetrators inevitably become more visible.

If she wants a 32-county republic, there is much she must confront. “Keep people from their history and they are easily controlled,” warned Marx. That is surely more than a mindless aphorism to a gifted politician such as McDonald.

1 Could Ireland put towns under lockdown if coronavirus arrived?
2 IRFU seek meeting over call to postpone Ireland-Italy match
3 Dublin man may have been stabbed to death by woman in parking space row
4 Irish in Italy on coronavirus: ‘The city is in a bit of panic – the streets are empty’
5 Fintan O’Toole: If murderous dissidents are wrong, so was Provisional IRA
Real news has value SUBSCRIBE