Miriam Lord: Micheál refrains from getting the boot into Boris 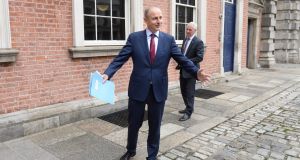 Taoiseach: Micheál Martin: “I do have a lot of experience of negotiations. You allow things to… evolve.” Photograph: Dara Mac Donaill / The Irish Times

Get in there now.

This could be his Stuttgart ’88 moment – greatness guaranteed along with the eternal gratitude of a nation. He could be the Ray Houghton of his day. And the only thing he’d have to kick around is an unprincipled ball of blancmange called Boris Johnson.

- Who put the ball in the England net? Micheál. Micheál.

- Who put the ball in the England net? Taoiseach Martin did.

To be sung with teary pride at Fianna Fáil Ard Fheiseanna forevermore and with grudging admiration wherever proud Gaels meet.

Act now and it could be the making of you, wheedled fellow party leaders. Go on, put him under pressure!

If only things were so simple, sighed Micheál.

There was no end of encouragement from the Dáil sidelines.

“Steam in and bate lumps out of him!” urged Mary Lou McDonald.

Or words to that effect.

But the Taoiseach isn’t togging out for now. He won’t do it, even if he would love to do their bidding and publicly denounce Johnson for reneging on an international treaty and its essential Irish protocol. But at this juncture, he says the EU negotiating team should be allowed get on with the job of wrangling the UK’s wayward representatives as talks enter a very delicate stage, with last minute twists always a possibility.

“I will therefore exercise judgment in terms of both how I intervene, when I intervene and the manner of my intervention,” he informed his crestfallen opposite numbers. They believe you can’t trust a word out of blethering Boris’s mouth and that the only way to bring the shameless populist to heel is by kicking up a fuss and embarrassing him on his home turf. It’s the only thing he understands.

“It makes a lot of sense. You don’t just jump into something” he explained to the Sinn Féin leader after she exhorted him to “dispense with the diplomatic niceties” when dealing with a man whose “dangerous and stupid” approach to both Ireland and binding treaties was proof that “perfidious Albion is alive and well and living at no 10 Downing Street”.

The Taoiseach painstakingly explained it wasn’t in the Government’s interest to get embroiled in whatever dastardly “machinations” Boris Johnson is chancing his arm with at this critical end-stage in the Brexit withdrawal negotiations.

Twice, he loftily informed Mary Lou that he knew all about negotiating, steepling his hands together and jabbing them in her direction to underline his superiority in this area. “And I do have a lot of experience of negotiations. You allow things to…” He shot across a condescending look, rolling the final word around in his mouth before enlightening her with it.

She didn’t let up, excoriating him for taking a “staggering, absolutely staggering” three days to decide to even lift the phone to talk to the reckless PM when his first instinct should have been to go looking for him immediately.

“And I have to tell you – I rang and tried to make contact on Monday, but I’m not the head of government,” she revealed. It obviously didn’t go well. God be with the days when Gerry Adams could rustle up any world leader on the blower. Now only Bono can do that.

No need for knee-jerk reactions in the middle of negotiations, the Taoiseach repeated, while stressing he wasn’t happy with the UK’s “unprecedented” decision to play fast and loose with international law.

And lest anybody forget: “I have experience of negotiations deputy, quite significant experience.”

But the Sinn Féin leader wasn’t the only one urging him to steam into the British PM in their next telephone conversation.

“You need to be very clear and very tough with Mr Johnson,” Boyd Barrett told Micheál. This repudiation of the Irish protocol represented “a direct snub and insult to you, Taoiseach and to the people of this country” and he needed to let the PM know he would not accept it.

The People Before Profit TD said the episode signalled a need to have a conversation about ending partition.

“I think there’s never been a better time to make that case when you have such a rotten, a rotten Prime Minister as Boris Johnson who embodies the worst of British Imperial arrogance” - each “rotten” contemptuously hacked out by Richard like a cat coughing up a hairball.

But it was Labour’s Alan Kelly (AK47) who had most to say about Johnson riding roughshod over Ireland and international law. (It must be that Boris, the notorious philanderer, has run out of things to ride in England at this stage.)

He made a passionate plea to the Taoiseach to lace-up for Ireland and go hell for leather for the PM. Alan was incensed by Johnson’s blithe disregard for the rules he found himself quoting Maggie Thatcher.

“‘Britain does not renounce treaties. Indeed, to do so would damage our own integrity as well as international relations’,” he declaimed.

“And I hope it’s the first and last time I ever have to quote Mrs Thatcher.”

‘Doing the world a favour’

The Labour leader said the Taoiseach would have his full support if calls the Tory party leader to book. “You need to stand up and call this out for what it is. This is obviously a critical juncture but I don’t trust Boris Johnson” Kelly told the House, using language as unprecedented as Johnson’s carry-on.

The British government needs to be called out and “what will work with Boris Johnson, is the bigger impact it has on him domestically”.

Then he told a bemused looking Micheál: “I think it is a very important moment for you personally, as Taoiseach. You’ve been been through a lot in this country since you became the Taoiseach.” This could be, for him, “critically, possibly the most important moment in some ways”.

So do it. Tog out for for Ireland.

“And I think you’ll be doing the whole world a favour and definitely the whole of Europe a favour.”

For the moment, Micheál is content with taking a dim view on Sky News and CNN for starters, and letting the EU get on with negotiating.

Good luck with that, says the opposition. Say nothing and an emboldened Boris will walk over you.

Put him under pressure!

It’s a high stakes game. Micheál is biding his time.

Will it be his Stuttgart, or his Saipan?