Britain must ‘respect the Northern Ireland Protocol as signed with the EU’, House speaker says 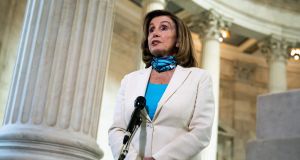 US house speaker Nancy Pelosi has warned there will be “absolutely no chance of a US-UK trade agreement passing the Congress,” if Britain violates an international treaty and Brexit undermines the Belfast Agreement.

In a statement to The Irish Times on Wednesday evening, Ms Pelosi said Britain must “respect the Northern Ireland Protocol as signed with the EU to ensure the free flow of goods across the Border.”

“The Good Friday Agreement is the bedrock of peace in Northern Ireland and an inspiration for the whole world,” she said.

“Whatever form it takes, Brexit cannot be allowed to imperil the Good Friday Agreement, including the stability brought by the invisible and frictionless border between the Irish Republic and Northern Ireland.”

“If the UK violates that international treaty and Brexit undermines the Good Friday accord, there will be absolutely no chance of a US-UK trade agreement passing the Congress. The Good Friday Agreement is treasured by the American people and will be proudly defended in the United States Congress.”

Wednesday evening’s intervention by Ms Pelosi, the top Democrat in Congress, is likely to increase pressure on the British government over its controversial decision to row back on parts of the Brexit withdrawal agreement it agreed with the European Union last year.

It reflects growing unease at the highest level of US politics at the apparent U-turn by the UK government over previously-agreed commitments over Northern Ireland in the Brexit negotiations.

Both the Irish and the British governments have been in contact with senior figures in all branches of government in Washington in the last 24 hours, following the unexpected move by Boris Johnson’s government to publish domestic legislation that apparently overrides some elements of the withdrawal agreement signed last year.

It comes as Richard Neal, the chair of the Ways and Means committee, told The Irish Times that a trade deal between the United States and UK “simply will not happen,” if a hard border returns.

Mr Neal, who has significant authority over US trade policy as chair of the House Ways and Means committee, said of the British government: “I think that they are making a terrible miscalculation. A trade deal between the United States and Britain simply will not happen if they restore a hard border.”

“What they’re missing here, and perhaps they need a reminder of how bad things were 30 years ago,” he told the Irish Times.

He said that all parties in the North had given up something during the complex negotiations on the Belfast Agreement more than 20 years ago. “The Republic of Ireland relinquished Articles 2 and 3 of the constitution, the unionist community accepted a Belfast-Dublin connection that required the elimination of the border.”

“I think today that elimination has become a model for how ancient conflicts can be resolved,” noting that two generations in the North of Ireland have now grown up without the troubles.

Though the executive arm of the US government negotiates trade agreements, approval from Congress is also needed. It is understood that Mr Neal has already made it clear to the US Trade Representative Robert Lighthizer that the Northern Ireland issue must be resolved in order for the Ways and Means committee to take up the legislation in the House. Mr Neal is also in regular contact with the British ambassador in Washington, Karen Pierce, and members of the British government and spoke with Northern Ireland Secretary Brandon Lewis as recently as last week.

“We believe that the Northern Ireland Protocol of the Withdrawal Agreement is a hard won compromise that requires respect from all parties given its status as an International Agreement,” the association said in a statement. “Political leaders and trade negotiators may sabre rattle all they want as they seek to negotiate a much needed trade deal but the Good Friday Agreement cannot be viewed as a bargaining chip.”

While Democratic presidential candidate Joe Biden has not yet publicly commented on the latest development in the contentious Brexit negotiations, his foreign policy advisor Tony Blinken warned that the Belfast Agreement must be protected.

“Joe Biden is committed to preserving the hard-earned peace & stability in Northern Ireland,” he wrote on Twitter. “As the UK and EU work out their relationship, any arrangements must protect the Good Friday Agreement and prevent the return of a hard border.”

While US president Donald Trump is strongly supportive of Brexit and is seen as an ally of British prime minister Boris Johnson, Mr Biden has a strong interest in Irish affairs, and is a committed internationalist who supports the European Union and Nato