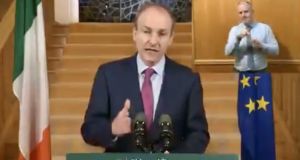 Here comes the Taoiseach again with another address to the nation.

If familiarity breeds contempt, Micheál Martin was on a sticky wicket before he uttered a word on Tuesday.

In years to come, people won’t be asking each other where they were on the evening he took to the steps of Government Buildings for the umpteenth time to say little has changed since his last televised update.

The Taoiseach had welcome information to repeat on the reopening of school and childcare facilities, as already reported in detail for days by media outlets.

He also confirmed the inevitable continuation of lockdown to a public already drip-fed this inevitability by his own Government – a public mightily frustrated by their leaders’ unwillingness to level with them like adults.

Who can blame people feeling cheesed off when these once-hugely anticipated events of major national importance have become nothing more than a drab rubber-stamping of leaks, with the addition of flags and a fancy set.

The Government has become a walking spoiler alert.

Micheál was scheduled to speak just after 6pm to a nation-not-holding-its-breath, with the traditional break into the RTÉ evening news. He will have been aware of the big build-up to this moment and the pervading commentary that he needed to deliver the speech of his life to reassure and give new strength to a public jaded and fragile after a year of rolling lockdowns.

He had to be pitch perfect. He couldn’t afford to put a foot wrong. He needed to inspire confidence and hope by clearly setting out the path to liberation.

He had to deliver not a clarion call, but a clarity call. A tough order, when clarity is in very short supply in an ever-changing situation.

One can imagine the Taoiseach in his office in Government Buildings, waiting for the nod to ascend the marble staircase while the six o’clock Angelus bell rings out from the TV.

Bong! And Micheál gets the last few dabs of powder on his forehead. Bong! He psychs himself up, jogging on the spot, rolling his shoulders. Bong! Shadow-boxing at the portrait of Dev before running down the ministerial corridor to his destiny.

Shimmies down the familiar golden carpet to the podium.

When he begins the speak the highlight of the evening appears.

No. Not the Taoiseach, who managed to be upbeat and downbeat at the same time. For those who were watching on the RTÉ news channel it was Michael Feeney, the sign language interpreter in the top right hand corner of the screen. With his hard-working colleagues, Michael is a familiar sight on these occasions.

The Taoiseach stood in front of two flags: to our left, the tricolor and to our right, the EU flag, with the interpreter superimposed above it.

It’s probably an indication of the lack of new information and general listlessness from the podium that drew the eye to the sign language man’s pair of baggy blue Euro flag trousers, or so it seemed from the picture on the screen.

They cheered us up anyway.

But back to Micheál, who had no material to play with.

“As I speak to you this evening I am conscious that I am speaking to a country that has endured almost 12 months of Covid-related restrictions,” he began, before acknowledging how everyone is “physically and emotionally exhausted” by the pandemic and how “we are all completely fed up with this imposition on our lives”.

This was a tough gig in front of a tough audience, and that’s not including the Opposition, which was doing the rounds all day criticising the Taoiseach, his Minister for Health and his Government for its handling of the crisis and waiting to be let off the leash in TV and radio studios as soon as he finished his speech.

The message was clear: we’re not out of the woods yet but we can see a definite way back now.

“The end is now truly in sight,” he said, trying to rally the citizenry into one last push to see off the virus, or at least one last push until the vaccine kicks in.

To those seeking a more definite roadmap out of lockdown, they were disappointed by the aspirational nature of the address. There were no definite dates given as to when different areas of society might be opened – once bitten, twice not going to relax restrictions too early. Micheál alluded to Boris Johnson’s declaration that dates are not as important as data.

In the Taoiseach’s case, however, he didn’t overload his speech or his “path ahead” to “resilience and recovery” with much data either.

It all depends on the vaccine, as everyone knows anyway. There wasn’t much interest in the “zero Covid” approach being pushed by most of the Opposition now, along with demands for more comprehensive mandatory quarantine requirements.

It’s till the old story: keep infection low and accelerate the vaccine programme in line with supply.

“But, but, but!” You could hear the shouts from across the land as Micheál said salvation was at hand in the form of the vaccines. Had he not heard about AztraZeneca drastically cutting the EU’s allocation for the next quarter of this year?

As it turned out, he had. During a press conference following the address, the Taoiseach said the “number crunchers” had time to include the figures in their calculations. The outlook still looks promising, with a promise that 82 per cent of the adult population will have at least one jab by June.

The Tánaiste adopted a more upbeat tone when he addressed the media briefing. There are “grounds for hope and reasons for optimism”, said Leo Varadkar. And we can look forward to more restrictions being eased by Easter.

And won’t it be lovely to see the little kids in their uniforms next week, trotting off to school again?

Level 5 may be lifted by April 5th. Just another month or so to endure was the inducement.

But one date was never going to appear on the plan. Imagine if Micheál had stood on that podium and promised a new dawn on April 1st?