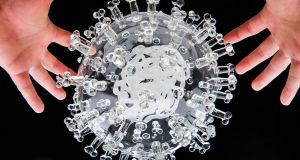 A glass sculpture of the coronavirus by Bristol-based artist Luke Jerram, which, measuring 23cm in diameter, is a million times larger than the actual virus. Photograph: Ben Birchall/PA Wire

There are “real risks” that Ireland could face the same struggles with Covid-19 next winter as in recent months, the Government’s new plan for living with the pandemic has warned.

Despite Taoiseach Micheál Martin saying on Tuesday night that “the end is truly in sight”, the plan outlines a range of challenges in the coming months as the State fights to keep control of the pandemic using enhanced contact tracing, testing and other interventions during a “slow and gradual” reopening of the economy.

It also contains dour warnings about the impact of the pandemic on the State’s finances, and the need to taper spending on supports as soon as a recovery is in motion, as well as the risk that payments to businesses may be preventing firms from shifting into areas of the economy that are growing.

In the near term, the plan holds out the prospect of limited relaxation of some restrictions in April, such as the 5km rule, permitting more outdoor activities and meetings, reopening construction and more sport being permitted. However, these would be contingent on progress being continued, and any relaxations will be followed by a three- or four-week bedding in period to measure the impact on the pandemic.

Under the new plan, schools and childcare will resume by the middle of April, and business and economic supports will be extended to the end of June. Some scheduled clinical services will be reintroduced if disease numbers allow. Criteria for measuring the pandemic will be disease prevalence, impact on the hospital system, vaccination progress, and emerging information on variants.

It sketches an expansion of the role for public health, and particularly for testing and tracing – including a greater role for community level testing of asymptomatic people and so-called “rapid” antigen testing. There will be detailed advice produced for different sectors, as well as an expert group which will report on ventilation.

It promises further enhancements in contact tracing and an “aggressive testing strategy with a low threshold for intervention”.

Consideration will be given to providing supports for those isolating.

It signals that further action on restricting international travel may be considered, and that current measures will be kept under “constant review to ensure travel does not become a weak link in our response as domestic transmission is brought under control”.

Pre-departure PCR tests will now be needed for passengers transiting through Irish airports, while categories of reasonable excuses for overseas travel will be narrowed. The document says these are “an unprecedented set of restrictions for a country that is ordinarily very dependent on international travel”.

It reveals for the first time that 23 people living in Northern Ireland were each fined €100 for crossing the Border into the State without having a reasonable excuse for travel. This measure came into effect on February 8th.

The State’s five-level framework will be retained, but the document also suggests subtle but significant shifts in the State’s approach.

Three overarching objectives will be at its core: reducing case numbers; vaccination and protecting the vulnerable; health services, social care, education and childcare. The plan emphasises the need to keep numbers low once suppression is achieved.

“Experience shows it can accelerate quickly if it is not aggressively and proactively suppressed.”

It promises more investment in genome sequencing, sero-prevalence studies, IT, surveillance tools and infection prevention and control. There will be a role for “widespread surveillance testing” and rapid test research studies. “Consideration is also being given to the use of rapid tests in asymptomatic community populations,” it states.

While the plan is optimistic that vaccination will accelerate meaningfully in the weeks, it flags that a “complex balance between Covid-19 fatigue and resilience is emerging”. It says there is a risk that high levels of fatigue could damage compliance with measures, and there are further risks that those vaccinated will be “less likely to adhere to public health measures”.

It says when the virus is brought under control “there will be a need to move away from the extensive and wide-ranging emergency supports in place” towards more targeted interventions.

As recovery takes hold, it warns that “steps to put the national debt-income ratio on a downward trajectory will also be necessary”.

It states the economy will not “return to as it was prior to the pandemic”. “There will be permanent changes in the labour market, and in the way goods and services are produced and traded.

“In order to ensure fiscal sustainability, therefore, it will be necessary to roll back these temporary expenditure measures once vaccine rollout has progressed and the economy has reopened,” it warns, adding that high debt is “another reason why fiscal sustainability will have to be addressed sooner rather than later”.

It also warns that general supports hinder the ability of firms to transit out of declining sectors and into expanding ones.