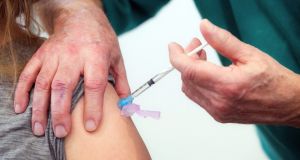 AstraZeneca has said it will deliver all 180 million vaccine doses to the EU in the second quarter of the year as contracted with half coming from the EU supply chain and half from its international supply network.

The statement came on Tuesday night, after earlier it emerged that the company informed the EU it expects to deliver less than half the Covid-19 vaccines it was contracted to supply between April and June.

An EU official involved in talks with the Anglo-Swedish drugmaker told the Reuters news agency that the company told the EU in internal meetings it “would deliver less than 90 million doses in the second quarter” to the bloc.

This would be less than half of the 180 million doses initially expected to be delivered to the bloc during the period according to a leaked copy of its contract with AstraZeneca.

However on Tuesday night, a spokesman for the company, said: “AstraZeneca confirms today that its most recent Q2 forecast for the delivery of its Covid-19 vaccine aims to deliver in line with its contract with the European Commission. As per this contract, approximately half of the expected volume is due to come from the EU supply chain, while the remainder would come from its international supply network. At this stage AstraZeneca is working to increase productivity in its EU supply chain and to continue to make use of its global capability in order to achieve delivery of 180 million doses to the EU in the second quarter.”

Any shortfall is already accounted for in the State’s expected vaccine delivery schedule, according to which 82 per cent of adults would have received at least a first shot by the end of June.

On Tuesday, the EU confirmed in internal briefings to ministers that 300 million Covid-19 vaccine doses are now expected to be delivered to the bloc between April and June. Roughly 3.3 million would go to the Republic, according to its population size, with additional doses on top if the one-shot Johnson & Johnson Covid-19 vaccine is approved by the European Medicines Agency (EMA).

Irish Government figures released on Tuesday forecast 1.2 million vaccine doses being delivered to the State by the end of March and 3.3 million doses between April and June, plus an additional 600,000 one-shot vaccines from Johnson & Johnson if the latter jab is approved.

The EU this month announced it had ordered additional deliveries of the Pfizer and Moderna vaccines, including 75 million doses between April and June.

“Talks on AstraZeneca delivery schedule are ongoing. The company is refining its schedule and consolidating it on the basis of all available production sites in and outside Europe,” a spokesman for the commission said.

“The commission expects to be provided with an improved schedule proposal.”