Miriam Lord: Healy-Raes honour Jackie with a hooley in the middle of the day 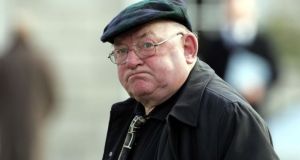 Expressions of sympathy on the late former TD Jackie Healy Rae were heard in the Dáil on Wednesday, nearly five years after his death. File photograph: Eric Luke

Lunchtime on Wednesday in Leinster House.

The corridors are quiet. Leo Varadkar is still in the chamber answering routine questions about his department. About half a dozen deputies listlessly listen.

Suddenly, a strangulated wailing erupts from the vicinity of the Dáil bar. Like somebody has put Mattie McGrath’s dancing medals in a vice and is tightening the screw. It is followed by sounds of people roaring.

The bar doors open to a wall of noise – singing, laughter, clinking glasses and the melodious sound of a traditional squeezebox.

Midday is not long gone but the Jackie Healy-Rae retrospective is in full swing.

Summoned by those opening blasts on the bagpipes, staff rush through the linking passage from the canteen area to witness the scenes.

Danny Healy-Rae is playing the squeezebox with a jaunty precision to jubilant cries of “Up the Kingdom!” The place is packed.

There is a hush. Among the settling pints, a man launches into a song. The crowd joins in the chorus, swaying.

“Ho no, tah-was the truuute in her eyes ever dawning

Amid more cheering, the music continues. Someone whips out a tin whistle. Others cut a few steps on the carpet near the private entrance to the Members’ Bar.

High Summer and people are sweating. Over a hundred members of the Healy-Rae family and “organisation” have travelled from Kerry to Kildare Street to hear formal “expressions of sympathy” expressed in the Dáil on the passing of the Healy-Rae patriarch, Jackie, who died in 2014 at the age of 83.

It’s a bit after-the-event, given that the original cap wearer and larger than life TD died nearly 5 years ago.

His son Michael – one of two Healy-Rae brothers in the Dáil – explained to the House that they thought of the tributes back in 2015, but things like general elections and council elections came up and they never got around to it.

But they realised if they didn’t do something soon, they mightn’t be around themselves. “Even this length of time afterwards, I think it is nicer. It is very special and something that we will remember forever” he told the Dáil, as his brother nodded beside him.

The Distinguished Visitor’s Gallery was filled with family members – including Jackie’s three grandchildren who are now members of Kerry County Council. Upstairs, following negotiations over numbers with the ushers, members of the Healy-Rae “organisation”, the political support team in the Kingdom, watched from the visitors’ gallery.

And because this was a Kerry event, TDs from all sides of the political divide were in the chamber to say their piece, while senators from the Kingdom sat along the rails at the top of the steps to make their presence known.

There was a notable absence. Minister of State Brendan Griffin from Castlemaine (Fine Gael) was nowhere to be seen. As the tributes flowed to Jackie - they went on for nearly an hour, some on the Fine Gael benches looked around to see where their man was.

Leo Varadkar spoke, Micheál Martin – who dealt with Jackie when Fianna Fáil were in power in the 1990s – spoke with affection and warmth. So too did Labour leader Brendan Howlin. Independent TD Michael Lowry fondly remembered his relationship with fellow independent Jackie, comparing him to that other legendary Kerryman Daniel O’Connell.

Constituency colleague John Brassil from Fianna Fáil spoke, as did Sinn Féin’s Martin Ferris, who was almost misty-eyed as he recalled his days with Jackie. He talked of the time Jackie’s beloved pony Peg went missing. “It was international news, not national news.” He was broken hearted at the time, but she turned up in the end, safe and sound.

He said Michael and Danny Healy-Rae are not only fellow TDs representing Kerry, but they are his friends.

“The one thing they all have is the common touch. They represent the common ordinary people of the country. They are not in a bubble. Ireland is a lot more than what is inside the Red Cow roundabout. Jackie Healy-Rae was a testament to their politics, the politics of the common man and woman. They are fantastic people.”

At one point, the Ceann Comhairle intervened between speeches to tell the House that Brendan Griffin had been in contact. He was detained on departmental business and wouldn’t make it back to the Dáil on time. Seán Ó Fearghaíl passed on his words in absence.

There was a relieved round of applause from the Fine Gael benches.

When the Ceann Comhairle called for expressions of sympathy, he noted the passage of time since the late TD’s death. “The reality of political life is that long after many of us will be forgotten, the legend that was Jackie Healy-Rae will be remembered with fondness and respect.” He remarked on the size of the crowd in the visitors’ gallery. “I can only assume that the population of the Kingdom is somewhat depleted today.”

There was a brief smattering of applause and a buzz of excitement rose in the gallery followed by a booming roar. “G’wan Kilgarvan!”

During the reminiscing, the Taoiseach reminded everyone of the time Jackie said he represented “the plain people of Ireland” and was asked to explain who they might be.

“The people who eat their dinner in the middle of the day.”

His sons are carrying on that policy. Loudly and staunchly representing the plain people of Ireland and still eating dinner in the middle of the day.

The Healy-Rae boys picked up the bill, treating the troops while honouring their father at the same time

The little commemorative booklet they had done up for the meal afterwards was headed “Lunch hosted by his sons Deputy Michael Healy-Rae and Deputy Danny Healy-Rae.”

That was a mistake. Clearly typed up by someone from that place known as “Above in Dublin”.

It was, of course, dinner.

The menu: Cream of Vegetable Soup. Turkey and Ham with pototoes and vegetables. White chocolate cheesecake with passion fruit coulis. There was also steak.

The Healy-Rae boys picked up the bill, treating the troops while honouring their father at the same time. They also ran a tab at the bar for the before and after libations.

Back in the chamber, the two sons spoke lovingly of the father they loved and from whom they learned so much.

Danny, the elder, was more emotional in his words. Michael, the more experienced TD, the more political. Both spoke intertwined the word “family” with the word “organisation”.

Micheal half joking, half in earnest, wanted rivals to look at the gallery “and realise that for every head and every pair of legs they see, there are 50 more at home”.

A text arrived from a rural TD. “It’s like a convention speech.”

The Healy-Raes are like an independent republic. They’ll be printing their own money next, with Jackie’s head on the notes.

And back in the bar, the hooley continued before and after the dinner until they crowd left for the last train to Kerry.

As they sang, the bar staff looked on as smart phones were held aloft recording the scenes – in flagrant contravention of the Leinster House rules. But the rules didn’t apply.

At the back near the door, the Captain of the Guard materialised. Singing is verboten too.

Back up at the top, a man burst into “Living Next Door to Alice”, Micheal Healy-Rae slamming his fist into his palm as he kept time.

The captain blanched, smiled and glided back out the door.

A former army man, he knows when to retreat.

Meanwhile, as the crowd enjoyed their final hours in the bar, Michael was on his feet in the chamber, talking about rural post offices. The visitors gallery was empty, and his voice was so hoarse he could hardly speak.

But it’s what Jackie would have done too.