As far as Taoiseach is concerned, if it didn’t occur on his watch, it didn’t happen

Tánaiste Leo Varadkar has apologised in the Dáil for his error of judgment in releasing a confidential document agreed with the Irish Medical Organisation to a rival GP group last year. 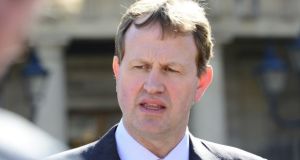 The diminishing drama of a leaky former taoiseach and his erstwhile friend was no match for the epic political production causing wild excitement here and across the water.

Having spent half the night being bamboozled by the US’s electoral system and CNN’s Magic Wall, all we wanted to do was mute Wednesday’s sitting of the Dáil and slink off somewhere dark for 40 winks.

Because on this bleary morning when we were all Sleepy Joes, Leo Varadkar’s cabinet seepage shame was going nowhere anyway. Following a story in Village magazine, the Tánaiste was forced into the Dáil on Tuesday evening to ’fess up to what he did when he was taoiseach in the last government, sending a confidential document on a pay deal with doctors to a friend leading a rival representative group.

His lengthy and glaringly contrived explanation was enough to mollify his successor and Coalition partner Micheál Martin.

“To be fair to the Tánaiste, he had no issue in coming into the house,” said the Taoiseach, mixing up his words. Obviously, he should have said “no choice”. But then, Micheál had no choice either.

He had to accept Leo’s bona fides or bring down the Government. Not a minor consideration – it kept Fianna Fáil’s chorus of bellyachers relatively quiet despite a deep annoyance at having to bail out, as they see it, the cocky and condescending Varadkar.

Meanwhile on RTÉ Radio, dexterously reluctant leadership contender Jim “Young Cuív” O’Callaghan deftly lambasted the Tánaiste’s handling of the controversy while stressing it was not a resignation matter. Jim is the Dublin 4 version of awkward Éamon “Young Dev” Ó Cuív.

Mary Lou concluded: “The truth is, Taoiseach, this is a very Fine Gael thing, you know? Government by ‘who you know’.”

As the morning wore on, the danger receded for Varadkar. Again, in fairness, the Taoiseach pointed out to the Dáil that not only did Leo turn up on Tuesday but he also took questions “for quite a period of time” and he also apologised and accepted he made an error of judgment.

Micheál felt this was “important”. The Dáil’s mini “Me Too” movement of expunged ministers would surely agree.

With the political world riveted by the US election, and Varadkar now cushioned by the Coalition’s majority, it was a tough ask for Opposition leaders to keep the spotlight on the Tánaiste’s embarrassment. Sinn Féin’s Mary Lou McDonald plundered her limitless reserves to keep indignation levels high, but the previous evening’s lengthy explanation, allied to Fianna Fáil and the Greens’ decision to accept it, took the heat out of the controversy.

However, with a clever eye to the disgruntled Fianna Fáilers (Young Cuív O’Callaghan noted in his interview with Claire Byrne that he didn’t see senior members of Fine Gael lining out to defend Fianna Fáil ministers who had to fall on their swords recently), Mary Lou concluded: “The truth is, Taoiseach, this is a very Fine Gael thing, you know? Government by ‘who you know’.”

It looked to her like Fine Gael members in his Government had been spinning out wrong information to the public and “perhaps providing you with no information”. You couldn’t trust them.

She was joined by Róisín Shortall of the Social Democrats in their continuing condemnation of Leo and his cabinet incontinence. But Micheál remained resolute in support of the Tánaiste, while taking a very dim view of his past indiscretion.

Róisín was very concerned about this grave lapse in standards. There is a code of conduct for office holders and Leo rode roughshod over it, she said. In case he had forgotten, she reminded the Taoiseach that it specifies that “office holders should respect confidences entrusted to them in the course of their official duties”.

In leaking a confidential cabinet document, what the Tánaiste did was more than a mere error of judgment – what he did was wrong, she continued.

She told the Taoiseach to make Varadkar go into the Dáil and apologise properly this time. “Get the Tánaiste to admit what it actually was: it was wrong.” He’d have a better chance persuading Donald Trump to concede the White House and embrace Buddhism.

As it stands now, Leo Varadkar might have transgressed any number of codes of cabinet conduct and indulged in any kind of conduct unbecoming a head of government when he was in charge last year – it doesn’t matter to one whit to Micheál. Once it didn’t occur on his watch, it didn’t happen.

Once Leo behaves when Micheál is in charge, that’s all he cares about. “First of all, I was not a member of the previous government and I am not accountable for its actions,” he told the Dáil. Shortall demanded an immediate review of the code of conduct for office holders to set out clearly how they are required to honour it.

Judging by Leo Varadkar’s loose interpretation of respecting confidences by leaking a document marked confidential, it seems “okay for you and members of your government to personally interpret that code”. But that was then. A different time. Ages ago, as far back as nearly six months ago.

It could have been the wild west before that, for all Micheál cares.

And all is good under his rule. He can even retrospectively pardon Leo.

“In my view, the essentials were out really early in this ... I’m very clear in relation to this.”

Doubtless, lessons will have been learned. At least that’s the impression the Tánaiste tried to convey on Tuesday night. The word has gone out from the Fianna Fáil ranks – where backbenchers remain extremely annoyed at having to cover for a Fine Gael leader they believe has been laying the groundwork for when he takes over as Taoiseach by trying to undermine them from within – that Leo’s cough has been considerably softened by this episode. He owes them now and will humbly do this by putting a stop to his gallop.

The nation awaits the emergence of this new retiring Tánaiste. For however long it lasts. Meanwhile, it isn’t true to say he hasn’t learned from his bruising experience. Leo now knows to look before you leak.