No closure orders for pubs under emergency Covid powers 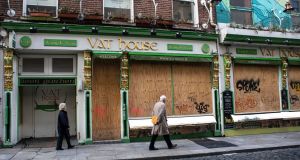 People walk by a boarded up pub in Temple Bar in Dublin late last month, amid the Level 5 Covid-19 restrictions in the city. File photograph: Damien Eagers/PA Wire

No closure orders or compliance notices have been issued to any pubs or restaurants under emergency powers given to An Garda Síochána to police Covid-19 measures, the Dáil has heard.

Minister for Justice Helen McEntee said that between July 3rd and October 24th there were 281 breaches, but fewer than 100 took place since emergency powers were introduced two months ago, with only 11 reported incidents in the week to October 24th.

Ms McEntee was speaking as she sought the extension of the sunset clause on emergency powers from November 9th until June 9th next year in the Criminal Justice (Enforcement Powers) (Covid-19) Act.

Dáil approval has to be given for extension of the powers, and the Government is seeking an extension to bring the law into line with the length of the Government’s Living with Covid-19 framework, which runs until the summer.

The legislation allows gardaí to inspect premises and close them down temporarily where there is a refusal to comply.

No pubs or restaurants are currently open under the Level 5 restrictions in place for the pandemic, but the Minister said the restrictions are only in place until early December.

“I think we all accept that Covid-19 will be with us until well into 2021,” Ms McEntee said, adding the emergency powers would continue to be required.

Sinn Féin introduced an amendment to extend the powers only to February 9th. The party’s justice spokesman Martin Kenny said emergency powers should be constantly reviewed and there was a “profound principle of law” that there has to be public buy-in to legislation.

Mr Kenny said that “if you don’t have buy-in, people lose respect not just for that law but for all other laws”. He said it was necessary to guard against undermining people’s confidence.

The Government defeated the Sinn Féin amendment by 82 votes to 63, and the emergency powers will be extended for a further seven months until June 9th.

Before Level 5 restrictions were introduced, gardaí could order that a business be closed immediately for the remainder of that day under the emergency provisions.

Gardaí can order closure for between three and 30 days for venues that do not desist from breaching the rules, and in the longer term, gardaí can also object to the renewal of a liquor licence for such premises.

Businesses such as cafes also face periods of closure under the regulations for breaching coronavirus regulations – such as by failing to keep the contact details of their customers for a period of 28 days.

The Minister expressed the hope that pubs and restaurants “will soon reopen, if we are successful in tackling the virus”.

She acknowledged that the public health restrictions have not been easy for anyone and the vast majority of people and businesses, including publicans, “have fully complied with what is being asked of them, even though they have had to put their livelihoods on hold”.

But she said “it would be completely unfair if the few who wish to flout the law and put their customers at risk are allowed to do so without consequence”.

Ms Connolly said the Minister had failed to produce any written report from the Garda Commissioner on the issue, adding that “the only public comment I have heard from the Commissioner was that he was a good public servant and he would do as he was told. That wasn’t a resounding endorsement of what you were bringing in.”

Ms McEntee said the Commissioner, in a letter to the Secretary-General at her department two days ago, “gave a very clear commitment that he supported this legislation and its continuation”.

The Minister told Independent TD Mattie McGrath she was not sure whether the Commissioner’s letter could be provided to TDs, but she would check and see.