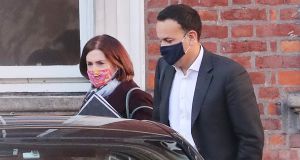 Taoiseach Micheál Martin has said the Level 5 restrictions will last for the scheduled six weeks period despite a substantial drop in case numbers over the past week.

Mr Martin told the weekly meeting of the Fianna Fáil parliamentary party on Wednesday night that the full period was needed to reduce the numbers sufficiently for the Christmas period and beyond.

He said the Government was working on compiling specific data sets on Covid levels in key sectors of the economy. This would help inform the State’s exit strategy from the severe restrictions currently in place.

Earlier, Tánaiste Leo Varadkar told members of his party that there would be no review of the Level 5 restrictions until at least four of the six weeks had passed.

He said he had discussed the issue in a meeting with Mr Martin and Green Party leader Eamon Ryan on Monday evening and they agreed that any easing of individual restrictions such as clothes shops or gyms would dilute the public message.

Mr Varadkar said the Covid indicators were going in the right direction and the prevalence of the disease was decreasing much faster than the Government had banked on.

According to sources, Mr Varadkar told the parliamentary party meeting that four of the six weeks of restrictions would be needed before any easing would be considered.

Mr Varadkar also spoke about the prospect of Joe Biden becoming US president, saying it could help Ireland in Brexit talks and could improve the global response to the Covid-19 pandemic.

One onlooker said that Mr Varadkar,speaking at a private meeting of Fine Gael party members, described Mr Biden as a “genuine friend of Ireland” who has a stronger interest in the country above and beyond “just a golf resort,” referring to Donald Trump’s golf course and hotel in Doonbeg.

He said it was looking increasingly likely that Mr Biden would be president according to current projects.

It is understood that Mr Varadkar said that the potential election of Mr Biden would be “positive news” for Ireland in other ways too as he has a “genuine personal attachment” and could in fact help with Brexit talks which appear to be once again stalled.

It is also understood that Mr Varadkar said that the “Democrats watched our back on Brexit” and said that if Mr Biden is elected it could change the dynamic of the current Brexit talks.

The Fine Gael leader also speculated that this could also result in America “taking the pandemic more seriously” and providing world leadership once again.

A source said he also warned that the “politics of Trump have not gone away” while opinion polls were being questioned again.