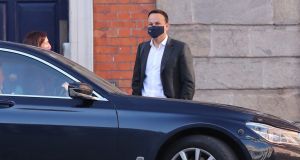 Tánaiste Leo Varadkar said the potential election of Joe Biden as US president could help Ireland in Brexit talks and improve the global response to the Covid-19 pandemic.

One onlooker said Mr Varadkar, speaking at a private meeting of Fine Gael party members, described Mr Biden as a “genuine friend of Ireland” with a stronger interest in the country above and beyond “just a golf resort”, referring to Donald Trump’s golf course and hotel in Doonbeg.

He said it was looking increasingly likely that Mr Biden would be president according to projections.

It is understood that Mr Varadkar said the potential election of Mr Biden would be “positive news” for Ireland as he had a “genuine personal attachment” and could help with Brexit talks, which appear to be once again stalled.

It is also understood he said that the “Democrats watched our back on Brexit” and that if Mr Biden was elected it could change the dynamic of the current Brexit talks.

The Fine Gael leader also speculated that this could also result in the US “taking the pandemic more seriously” and providing world leadership once again. A source said he also warned that the “politics of Trump have not gone away”.

Separately, Taoiseach Micheál Martin has said “we shouldn’t jump to conclusions” about the result of the US election.

Mr Martin said “it’s a fraught time for all those involved in the election”.

He told Solidarity TD Mick Barry: “The United States is one of the oldest democracies in the world. It has always managed its elections in a peaceful and democratic way, and I have no doubt that that will be the case on this occasion again.”

Mr Barry had accused Mr Trump of “trying to steal the election”.

The Cork North Central TD said the US president “now wants to go to the supreme court to stop the counting of ballots”.

He said: “I have no faith in Joe Biden or the Democratic Party to stop this election from being stolen. It was their dreadful pro-big business, corporate campaign which let Trump get this close in the first place.”

Pointing to the programme for government, which says the State will argue strongly for democratic values and democracy, Mr Barry asked the Taoiseach if he would support the call by the Socialist Alternative Organisation in the United States for mass demonstrations and civil disobedience if Mr Trump “tries to steal the election”.

Mr Martin said that “first of all the election isn’t over and last time I was listening in, earlier this morning, it was going to be a very tight race. A lot of votes have yet to be counted.

“It’s a tense time given how close it is, so I think the sensible thing to do is to allow the electoral process in the United States to take its course and we will see perhaps later this week as to who actually wins that election,” he said.