Healy-Raes exhaust patience over driving Bill, Kenny to be named European of the Year 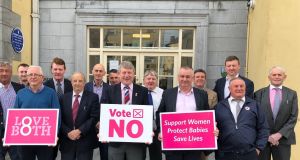 Men of the Week: members of Waterford City and County Council who stood for a group photograph to highlight their support for a No vote in the referendum. Photograph: Darren Skelton/Waterford News & Star. 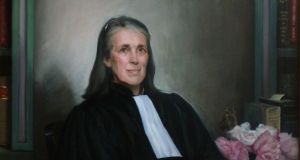 Susan Denham’s portrait by US artist Will Nathans was completed after a number of sittings in his Dublin studio.

The dining hall of the Honourable Society of King’s Inns is a magnificent room wherein baby barristers are granted the privilege of dining with eminent legal personages so they can learn not to disrespect them in court despite having seen them sozzled on the claret in Constitution Hill.

The gowns and dinner gongs and outdated etiquette build up a sense of collegiality among the diners as they set out on making career connections in the legal network. As they sit down to their four courses with wine, they are surrounded by portraits of great figures from the Irish legal world – some dating from the 17th century.

They are, of course, all men: robed and bewigged and in various forms of judicial fancy.

But recently, the first portrait of a woman appeared in the dining hall among the former chief justices and lords chancellor.

We hear there was a lot of debate about where to put Susan Denham, Ireland’s first female chief justice. How prominent her placing? Who to move to make way for her?

In the end she got a prominent position over a fireplace, with other portraits shuffled along the wall to create a space. She also got flowers in her portrait – another first.

The former chief justice is not the only woman in the King’s Inns collection of portraits though.

A portrait of the late Mella Carroll, our first female High Court judge, hangs in the library on nearby Henrietta Street. The collection also includes a portrait of Averil Deverell, one of the first two women called to the British bar (when Ireland was still part of it) in 1921.

Susan Denham’s portrait – done in oil on stretched linen – is by Will Nathans, a US born artist living in Ireland.

The painting was completed after a number of sittings in his Harcourt Street studio.

In the background, the shelves are lined by Denham’s personal books, including the autobiography of Sandra Day O’Connor, the first woman to serve on the US supreme court. It contains a personal inscription to Denham, from the first US female justice to the first Irish justice. The roses represent Denham’s gardening interest and the bronze bust is of her Connemara pony.

gone but not forgotten.

The former taoiseach is being honoured next month by the European Movement Ireland when he will be presented with its European of the Year Award. “Iar-Thaoiseach” Kenny, as he is called on the invitation to a “gala lunch and award ceremony” in the Shelbourne Hotel, is being recognised for his outstanding contribution to enhancing Ireland’s place in Europe.

Best of all, Enda will be getting his award from Leo Varadkar, the man who took his job. But that’s all over now.

The speeches will be fab. Bring a hankie.

And then, after summer, Enda will be the keynote speaker at a gala fundraising dinner in Chicago for the O’Connells GAA club and O’Connells school in Dublin.

The “Oneness Gala” is taking place on September 20th in the famous Drake hotel, and Enda will be doing his thing after the dinner and entertainment.

Before he left office, Kenny took a high-profile interest in the specific problems faced by the community in Dublin’s north inner city and he has maintained that contact.

Proceeds from the fund-raiser will be used to secure the club’s playing fields for future generations, as well as contributing towards everyday activities in the school and GAA club.

Who would have thought that interest groups from outside Ireland would start spending big bucks on slick social-media campaigns in efforts to influence the referendum vote?

Quite a lot of people, actually.

They predicted that a wave of expensive online advertising would flood timelines with “unbiased” material aimed at “informing” undecided voters in the run-up to the abortion referendum.

Who would have imagined lavishly-funded overseas campaigners infiltrating the Irish voting process and spreading lies dressed-up as convincing fact?

It’s not like this sort of thing has happened before, except in the US presidential election and the Brexit referendum and that’s just small beer. You can’t expect Irish legislators to sit up and take notice of such trivial things.

So you can imagine the surprise in Leo Varadkar’s Government when Facebook, YouTube and Google decided to do their work for them and address the malicious social-media messages multiplying in the referendum undergrowth. Facebook and YouTube have taken a big financial hit by stopping referendum-focused advertising originating from outside Ireland, while Google has banned all advertising to do with the vote.

The move caused extraordinary consternation in the anti-abortion No campaign, whose representatives said social media was the only way they could get their message out as they are being silenced everywhere else (except when out-postering and out-leafleting the Yes campaign, getting 50/50 speaking time across the airwaves and unique access to pulpits in churches countrywide).

One man who wasn’t surprised by this week’s development is Fianna Fail’s technology spokesman, James Lawless. The Kildare TD introduced his “fake news” Bill in the Dáil back in November, along with dire warnings about the online threat to our democratic process unless something is done to drag our electoral law kicking and screaming into the 21st century.

Despite his best efforts, the Government voted it down. One of the reasons given by Minister for Communications Denis Naughten was that the legislation might have a negative effect on the “advertising of constituency clinics”.

That’s the worldwide web for you.

And while the Government does its headless chicken impersonation in the wake of the Google and Facebook actions, Lawless was fielding queries all week from journalists in the United States and the UK and is now advising legislators from Brazil who got in touch for guidance on how to regulate this phenomenon. He has been invited by the European Commission to address a seminar on the subject in Brussels later this month.

Here, however, his Bill – which aims to strike a balance between free speech and necessary regulation – is still getting a lukewarm reaction from the Government.

“It’s a pity, because these proposals could have been law by now if they hadn’t blocked it,” says Lawless.

Well done to Catherine Murphy of the Social Democrats for invoking article 68 of the Dáil standing orders on Wednesday night, thus bringing to an end the latest instalment in the Mattie McGrath/Healy-Rae Road Traffic Bill windfest.

The Rural Alliance TDs have been leading the charge against Shane Ross’s Bill, which provides for an automatic driving ban for first-time drink-driving offenders caught with blood alcohol levels of between 50mg/100ml and 80mg/100ml. It will also allow gardaí to seize a car driven by an unaccompanied motorist on a learner permit.

The protesting TDs still have plenty of amendments left to spend time talking rubbish about and, with a bit of luck, they are clinging to a very slim chance that they might still be talking should the Government unexpectedly fall, bringing the Bill with it.

After the Leas-Cheann Comhairle announced he was adjourning the House for the night, McGrath and the Healy-Raes, standing together, rose to their feet and loudly protested.

Pat the Cope Gallagher pleaded with them to quieten down, but he was ignored.

Meanwhile, Maria Bailey, Fine Gael TD for Dún Laoghaire, stood up and tried to make a suggestion. “In the interests of practicality. . .” she began, only to be drowned out by the male voice chorus across the floor.

“I am comin’ here for. . .” bellowed Danny Healy-Rae, before even his voice was lost in the din.

“In the interest of practicality. . .” began Maria again, to no avail.

Pat the Cope did his best to impose some calm. He didn’t manage it.

Mary Mitchell O’Connor tried to silence the roaring Danny as her constituency colleague Maria Bailey tried once more to make herself heard.

“There is a woman speaking,” she told him while Bailey said something about the debate being “reduced” to something or other.

Bailey told him to have some respect.

The general consensus was that the Kerry TD was referring to the famous incident where Mitchell O’Connor, on her first day in the Dáil, mistakenly drove her car over the plinth on her way to the front gate.

And as the Leas-Cheann Comhairle got up to leave and other deputies just left the Mattie and the Healy-Rae to their noisy agitation, one last howl went up from Danny. “I never hit the pillars!”

The general view in Leinster House is that their carry-on is wearing very, very thin.

Men of the Week

The Men of the Week are those fine, upstanding members of Waterford City and County Council who decided to follow the current political trend and stand together for a group photograph to highlight their support for a No vote in the referendum. The 14 men favour keeping the Eighth Amendment on abortion in the Constitution and changing nothing for Irish women who find themselves in crisis pregnancies and have to travel to England for a safe, legal termination.

There are 32 members of Waterford Council, four of them are women, none of whom turned up for the eye-catching No Womb at the Inn photo.

The portrait of them making their courageous stand is pregnant with meaning. Which is something they never will be.

Man of the week: Bishop Dermot Farrell (63) of Ossory. Here he is yesterday, the bishop, bringing all the benefit of his priestly experience of women to the subject of abortion and rape.

“First of all, rape is a violent act and it’s a violent crime against a woman – a terrible crime. And sometimes, what I understand from women who have been raped, is that the abortion that followed sometimes after rape was far worse than the rape itself.”

It must be a proven fact so, sometimes.

Isn’t it what raped women do sometimes after they have been violated - they go to their nearest RCC in search of support and compassion and advice?

That would be their nearest Roman Catholic Celibate. Not Rape Crisis Centre.

Always good to hear from the experts.