All involved in cancer screening controversy will have to account for actions, says Taoiseach 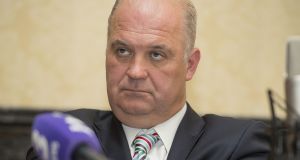 The Taoiseach has backed the State’s chief medical officer Dr Tony Holohan after it emerged he received memos in 2016 showing delays in women with cancer being told about false smear tests.

Leo Varadkar and Minister for Health Simon Harris, however, warned that nobody was immune from being held to account for their role in the failure to disclose incorrect tests by the CervicalCheck screening programme.

Speaking at a press conference in Dublin on Friday, Mr Varadkar and Mr Harris both expressed confidence in Dr Holohan, the Government’s most senior adviser on health matters.

Both politicians said that any conclusion on the role played by people involved in the controversy should wait until the results of the scoping inquiry led by public health expert Dr Gabriel Scally – which is due to report by the end of June – and the follow-up commission of investigation.

“Everyone deserves due process and a fair hearing and that’s exactly what these investigations will do,” Mr Varadkar told reporters.

He sought to push any conclusions being reached on others outside the political system where on Thursday, hours after heated exchanges at the Public Accounts Committee, Health Service Executive director general Tony O’Brien resigned following the publication of the 2016 memos.

The investigations were “the right way to do it, not in a star chamber in the Dáil where it is party politics and politically charged [but] done in a commission of investigation, in the right way,” said Mr Varadkar.

Asked whether Mr O’Brien received a fair hearing, the Taoiseach said he did and that “he went by his own volition”.

“Everybody who has had any role in this will have to account for their role,” said Mr Harris, noting that people would have to hand over all relevant documents to the Scally inquiry.

“Then we will make an informed judgment when we have seen all of those pieces of the jigsaw in relation to exactly who knew what when, and what was behind the decisions at the time,” he said.

Mr Harris suggested that nobody, no matter how senior and including officials within the Department of Health, the HSE and other agencies, would be immune from being held to account for their actions.

“There are other people who work in the public service and civil service, in jobs that are also well remunerated, that also have accountability,” he said.

Dr Holohan’s role in the controversy came into focus on Thursday when the department said he received a March 2016 memo that called for a suspension in letters being sent about false tests.

A week before the memos became public, Dr Holohan said he only learned of the non-disclosure of information to women involved two weeks ago after the settlement of the High Court case taken by terminally ill Limerick woman Vicky Phelan, who exposed the controversy.

On the March 2016 memo, Dr Holohan told the Public Accounts Committee on Thursday: “I can’t honestly tell you whether I saw this specific memo or not, but the general information that it includes is not in broad terms new information to me.”

In response to queries from The Irish Times, the Department of Health argued that there has been no contradiction in the public statements made by Dr Holohan.

“The purpose of the March 2016 memo was to raise awareness of the audit process. It refers to delays (pauses) caused by legal issues, which were subsequently resolved, and makes no reference to non-disclosure,” said the department.

It added that the first knowledge that Dr Holohan had of non-disclosure to patients was on April 26th and the full extent of it became clear on April 29th.

Both Mr Varadkar, who was minister for health at the time of the March 2016 memo, and Mr Harris, who succeeded him, both welcomed the department’s statement on Thursday that the memos did not reach them.

“I am really annoyed,” said Mr Harris of his failure to be notified about the memos. “How could you not be? I would have liked to have known about this.”

That the memos were sitting in his department was “a cause of concern”, he added.

Asked if any of his advisers knew, the Taoiseach said: “Not to my knowledge.” They all confirmed to him that they had not seen the memos, he said.

CervicalCheck programme manager John Gleeson, who “prepared” one of the July 2016 memos, declined to say whether he was also the author of the unsigned March 2016 memo.

When asked by The Irish Times whether he wrote the memo, the HSE press office replied on his behalf: “All these matters are subject to the Scally review. The HSE will cooperate fully with the review in all regards.”

The HSE said that it was always the intention for the letters to be released about the tests “as speedily as possible”, but the laboratories that carried out the tests raised legal issues, forcing the HSE to seek legal advice.