Taoiseach Leo Varadkar has apologised to the women affected by the CervicalCheck controversy but has admitted that words cannot ease the anguish that these women are experiencing. Video: Merrion Street 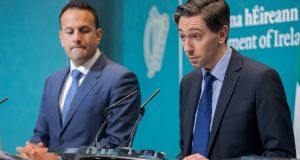 The Government believes that further “accountability” will be needed in response to the current cervical cancer screening crisis despite the departure of a number of senior health figures.

Announcing a package of measures aimed at assisting the women affected by the CervicalCheck scandal on Friday, Taoiseach Leo Varadkar and Minister for Health Simon Harris said nobody was immune from being held to account.

Mr Harris said nobody, including officials within his own department, the HSE and other agencies, would be spared. “There are other people who work in the public service and civil service, in jobs that are also well remunerated that also have accountability,” he said.

Meanwhile, The Irish Times has learned the former Health Service Executive director general Tony O’Brien, who resigned on Thursday, will receive more than €140,000 on his departure from office. It is understood Mr O’Brien will continue to be paid his regular salary up until the expiry of his contract at the end of July.

As part of his contract signed in 2012 with the Fine Gael-Labour government, he will also be entitled to an additional payment equal to six months of his €192,000 annual salary.

Government sources confirmed Mr O’Brien’s contractual obligations would be honoured in full and stressed this was not a “golden handshake” but a “legally binding agreement”.

Political pressure, meanwhile, continued to grow on Department of Health officials to outline their level of knowledge of the controversy.

It emerged this week that chief medical officer Dr Tony Holohan received memos two years ago saying women with cancer were not being told about false smear tests.

The Department of Health said on Thursday he received a March 2016 memo which said letters informing clinicians their patients had received incorrect results were being suspended.

Last week, Dr Holohan said he learned that women were not being told about false tests only after last month’s court case taken by Limerick woman Vicky Phelan that exposed the scandal.

The Irish Times understands further documentation has been identified within the Department of Health. It is expected it will be sent to the Oireachtas Public Accounts Committee and the health committee, and to the non-statutory inquiry into the controversy over the coming days.

Mr Varadkar and Minister for Health Simon Harris insisted at a press conference in Dublin that Mr Holohan had their support. “Everyone deserves due process and a fair hearing,” Mr Varadkar said.

Emma Mhic Mhathúna (37), a mother of five who was given incorrect smear test results and who now has terminal cancer, said the financial measures announced yesterday were not enough.

On Mr O’Brien, she said his departure was like “ripping the plaster off the wound”.

The HSE said yesterday it had made contact with 203 of the 209 women or families affected by the scandal. Some 1,353 calls to the HSE’s helpline were answered on Friday. The total number of calls answered now stands at 15,480.