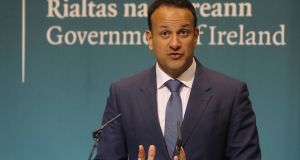 Taoiseach Leo Varadkar said the package would be offered to each of the women over the course of the next few weeks. Photograph: Lorraine O’Sullivan /PA Wire

The Government announced a number of financial measures aimed at assisting the women affected by the CervicalCheck controversy.

A clinical audit of all cases of cervical cancer between 2008 and 2018 found 209 women should have received earlier intervention.

A number of measures have now been agreed for those women including:

A discretionary medical card for each woman affected, or their next of kin in cases where the woman has died;

Medicines provided under the medical card scheme will be provided free of charge;

The cost of any medicines which have been prescribed by their treating clinician including those that are not covered by their medical card or their private health insurance, including experimental drugs;

Primary care supports, including counselling for the women affected and counselling services for the immediate family members of these women;

Other health and social care supports, including travel costs and childminding during treatment.

The measures outlined relate to the 209 women diagnosed with cervical cancer since 2008. Seventeen of these women are deceased. The assistance will be offered to their next of kin.

The Government has offered a clinical review to each of the women diagnosed with cervical cancer over the past 10 years. If it is found any other woman should have received earlier intervention, they will receive similar financial assistance.

Taoiseach Leo Varadkar said this would be offered to each of the women over the course of the next few weeks.

Speaking at a press conference, Mr Varadkar said: “We are very sincere about this package. It won’t happen overnight, we have to start it from scratch. Everyone has individual needs and wants, and it will take more time than a one-size-fits-all process.”