Calls for HSE to appoint board before choosing director general 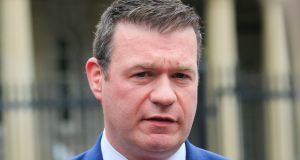 Labour Party TD Alan Kelly said the Government should move quickly to appoint a high-calibre board and its first task would be to choose a new director general. Photograph: Gareth Chaney Collins

The Public Accounts Committee’s acting chairman has said it would be short-sighted for the HSE to appoint its new director general before putting a proper board in place.

Labour Party TD Alan Kelly said the Government should move quickly to appoint a high-calibre board and its first task would be to choose a new director general.

“I have been thinking about this and cannot see any benefit or good in going ahead in appointing a CEO without a board being there. It defies logic and common sense,” he said.

Mr Kelly also said the PAC would be requesting as many as 10 senior figures in the health services to attend its meeting next week, as it continues its examination into the cervical smear scandal.

At the PAC meeting on Thursday, the contents of three memos from 2016 revealed a strategy to suppress communications to women diagnosed with cancer. On foot of the revelations, HSE director general Tony O’Brien stood down from his position on Thursday evening.

In order to discover more information on the documents, as well as any other relevant information, Mr Kelly has requested the attendance of the director general of the Department of Health; the chief medical officer; the acting chief executive of the HSE; the head of the Medical Council; the head of the National Cancer Registry; members of the Serious Incident Management Team in Health; as well as the HSE officials who wrote the memos.

“I am also concerned that people in the department were drip-feeding the Minister he said.

Fine Gael TD for Longford-Westmeath Peter Burke sharply criticised the HSE, saying it committed to open disclosure in 2013 but was trying to protect its own reputation in the memos written three years later.

Mr Burke defended his senior ministerial colleagues, saying they had acted quickly and appropriately in an open fashion once the scandal had come to light.

A number of politicians from all parties said they had been inundated with contacts from constituents and others in the wake of the RTÉ interview with Kerry-based Emma Mhic Mhathúna this week, in which the mother-of-five disclosed she has terminal cancer.

Fianna Fáil health spokesman Stephen Donnelly also said there was a failure of political leadership especially from Taoiseach Leo Varadkar on this matter.

“I’m reminded of Storm Ophelia. Every time you turned on the radio or TV, the Taoiseach was there. Now, he has been very conspicuous by his absence.

“He is a doctor and he is our Taoiseach and on this issue he has really badly let people down in not being front and centre. He has failed in his duty of national leadership.”

Sinn Féin spokeswoman Louise O’Reilly said she had been contacted by a huge number of concerned and upset women. Ms O’Reilly said the proper course of action should not have taken as long as it did. She said the Taoiseach when minster did a U-turn on mandatory open disclosure. She also suggested that Mr Harris was being “drip-fed” information only when required.