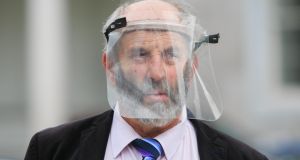 Danny Healy Rae accused the Taoiseach of hurting and “belittling” thousands of rural-based publicans and their patrons. Photograph: Gareth Chaney/Collins

In the plague-deserted halls of academe, lonely professors wept for joy into their dusty mortar boards.

White-coated boffins abandoned microscopes in shiny laboratories and danced around the test tubes.

What a day for the planet. What a day.

First the vaccine, and now this.

It could have been perfect.

But no, the Taoiseach had to go and ruin it all by deliberately trying to kill rural Ireland stone dead for the sheer hell of it.

“Stop nailing the lid on the coffin of rural Ireland!” roared Limerick TD Richard O’Donoghue in the Dáil on Wednesday, glaring with horror at Micheál Martin.

At least they didn’t know about this in the universities, institutes and seats of higher learning across the globe, where celebrations continued long into the night.

The second big breakthrough came in the way they tend to do: unexpected and all of a sudden.

It happened early in the afternoon from high on a balcony in the auditorium of Dublin’s Contention Centre when a certain Independent TD for Kerry rose to his feet and tackled the Taoiseach on the continued closure of country ale-houses under Covid restrictions.

“Where is your evidence?” bellowed Danny Healy-Rae. “Where is your scientific proof that pubs in rural Ireland were or would be the cause of transmission of the virus?”

That would be Danny “I believe God above is in charge of the weather” Healy-Rae, famous denier of the science of “this climate change thing”. The one and the very same Danny – fairy forts are causing dips in the roads – Healy-Rae, demanding to hear empirical evidence for shuttering pubs serving alcohol without the ballast of food because they are supposedly more conducive to the spread of coronavirus than their fancy-schmancy gastro cousins.

“Where is that evidence, Taoiseach?” he persisted, itching to run his slide rule over the scientific data. “If you have it, bring it forward because you haven’t put it out there yet.”

The shock news of deputy Healy-Rae’s belated conversion to the value of evidential science pulsed around the global research community. Leading experts were further cheered and encouraged when they saw images of the formerly sceptic influencer speaking in the Dáil – he had three biros neatly arranged, caps pointing uniformly upward, in his shirt pocket.

One of their own, now.

Denouncing the Government’s decision to keep “wet” pubs closed during the partial reopening of hospitality businesses in the run-up to Christmas, DHR accused the Taoiseach of hurting and “belittling” thousands of rural-based publicans and their patrons. The move was “anti-village” and would lead to unregulated drinking where “we’ll need good strong jeeps and vehicles to find them”.

Despite huge efforts to achieve compliance with the guidelines during the recent lockdown, they have been “summarily dismissed” and told not to reopen.

“I want you to get real and tell us what you have got against the pubs … the dancing schools and the artists. It’s totally illogical what you’re doing and it’s unfair.”

Micheál Martin will have been getting it in the neck from his own Fianna Fáil backbenchers in recent weeks over the continued closure of these hostelries, with his Fine Gael coalition partners not behind the door either in making their views known. He sounded thoroughly fed-up by the time Mattie started complaining in the Dáil.

The virus kills people and the only motivation behind any of the moves his Government is making is to protect lives.

“It is wrong of you, deputy, to play politics with it by asking the rhetorical question: ‘What have you against pubs?’”

As an old school Fianna Fáil TD, Micheál has been holding constituency clinics in public houses the length and breadth of his constituency well before the gastro-pub became a thing. His irritation with the question and its implication that he has it in for publicans was palpable.

“I have absolutely nothing against pubs,” he protested. “Don’t be so silly. For God’s sake, it’s too serious an issue to reduce it to that.” The measure was taken for public health reasons because lives are at risk.

“The Government has the pubs ruined,” interjected Michael Collins, one of Mattie’s Rural Independent sidekicks.

Collins returned to the ruination of the country pubs after Danny Healy-Rae’s touching decision to come out of the science closet.

“It is quite obvious you are protecting the pubs in Dublin,” declared the Cork South West Independent – a shocking allegation to level against a Cork South Central Taoiseach.

Michael Collins was cynically saying what he wants his constituents to hear, but if he holds his nose and endures a walk around Dublin – or any other part of urban Ireland – he will discover that the suffering and angst is far from confined to lounge bar owners off the beaten track.

“It will never be forgotten in every town and village in rural Ireland for what you have done to those pubs. I can assure you Taoiseach if you think it will be forgotten, you’re a very foolish man in this hour of your life,” foamed the fulminating Collins.

He was followed by a fourth RIG member, Richard O’Donoghue from Limerick county, who reeled off the names of villages within a 15-mile radius of his home in Granagh where not one pub is open. “You’re shoving them into towns and cities if they want to meet someone.”

Like Danny Healy-Rae, he wondered who would police the parties when people congregate in private instead.

This drink thing is very confusing. One minute it’s all about the lonely aul lads who just want the odd glass of stout and some company before tootling home in the car of an evening, and now it’s about them haring away on booze-fuelled all-night benders because the local is shut.

It only gets worse because the gastro-pubs are a problem too. It’s not that long ago since Danny was objecting to the new Bill to tighten the drink-driving laws and arguing, among other things, that having a big feed before driving is almost as bad as having a few gargles.

“If you eat too much and get in behind the wheel of a car, then you’re a danger on the road because you are likely to fall asleep after eating a big meal,” he told an Oireachtas committee examining the legislation.

Even if there was no pandemic you’d be nearly afraid to leave the house after thinking about it. In fairness though, this was before Danny embraced the science.

The Taoiseach wearily insisted to the RIGers he is neither anti-rural nor anti-village nor anti-jobs. The current situation is nobody’s fault, he said. It’s the fault of a virus, a global pandemic.

Which, of course, is totally fake news. It is clearly the fault of Dem Above in Dublin.

Sensible green tea man Micheál heaved the heaviest sigh. “There is nothing I would like better right now than a pint in some rural pub in an idyllic village in the west of Ireland.”

It was one o’clock in the afternoon.

Who could blame him.