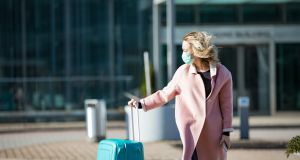 The guidelines said measures in place in aviation lower the risk of transmission of Covid-19 during air travel. Photograph: iStock

Air passengers should not automatically be considered high-risk for spreading Covid-19 and should be treated like members of the local population who have not had any direct contact with an infected person, according to new European guidelines for air travel.

The Guidelines for Covid-19 Testing and Quarantine of Air Travellers, published jointly by the European Centre for Disease Prevention and Control (ECDC) and the European Union Aviation Safety Agency (EASA), have, however, been described as “really dangerous” and “insane” by a leading public health expert in Ireland.

The guidelines, requested by the European Commission and published on Wednesday afternoon say travellers should “not be considered as a high-risk population, nor treated as contacts of Covid-19 cases, unless they have been in known contact with a confirmed positive case.”

Instead travellers “should be treated in the same way as local residents and be subject to the same regulations or recommendations as applied to the local population.”

Based on the latest scientific evidence and information, the document’s conclusions reflect the fact that the prevalence of the new coronavirus among travellers is estimated to be lower than is the case for the general population. In addition, the measures in place in aviation minimise the possibility of transmission during air travel.

The guidelines suggest that a 14-day quarantine is effective only in the “exceptional situation” where a country has achieved full control over the virus and reduced transmission levels to close to zero, and only then for travellers entering from countries where the virus keeps circulating.

“This new document is a true European contribution for the benefits of European citizens,” said Patrick Ky, Executive Director at EASA.

He added that its findings would be “important in making many family reunions over Christmas possible. It builds on the measures we already put in place with the Aviation Health Safety Protocol and reinforces the view that there is no inherent risk in air travel – indeed air travellers are seen as a relatively “Covid-safe” population.”

He called on “national decision-makers to take account of the recommendations given here when making their policies”.

The professor of community health at DCU Anthony Staines said the findings “defy logic” and were “really really dangerous”.

He said it seemed as if “Europe is throwing itself under the bus and this is a risk” and he suggested the guidelines had been brought out ahead of Christmas “to get people travelling again before the holidays and that is insane.”

He pointed out that the Australian city of Melbourne, which had largely contained the virus several months ago, had a wave of infections as a result of one passenger who arrived into the city and did not follow quarantine rules.

He said if people were flying from countries with a high incidence of Covid-19 to countries with a low risk, it made more sense to reflect that and treat the passengers from the high-risk location differently to those coming from the low-risk one.

However the guidelines have prompted a call from European and international aviation associations for European governments to “immediately abolish quarantine measures and other travel restrictions”.

“As such, quarantines fail the test of proportionality, a key principle of EU law – particularly since there are no equivalent measures at land borders,” he continued.

He said a more “harmonised, co-ordinated approach among EU, EEA and UK states is essential to increase clarity and predictability for citizens and businesses following the latest recommendation of the EU Council. This is essential for the recovery of the sector.”

Apart from the data presented by the guidelines, several other analyses confirm the absence of a correlation between passenger traffic and prevalence rates at national level.

He said that internal information produced by ACI Europe of airport passenger data in the third quarter of 2020 “unequivocally rejects any relationship between air travel and increasing Covid-19 transmission rates”.

He said the brief increase in air passenger traffic during this period was “proven to have no statistically significant relationship with the Covid-19 test-positivity rate, based on aviation, public health and community mobility data”.

His calls were echoed by Rafael Schvartzman, the International Air Travel Association’s regional vice-president for Europe, who said “rapid testing of passengers for Covid-19 “opens the door to restarting air travel by eliminating quarantine”.

The fresh advice is in stark contrast to both calls from the National Public Health Emergency Team (Nphet) and the Government for people overseas not on travel to Ireland for Christmas this year. A Government spokesman indicated on Wednesday evening that the official position here had not changed despite the updated guidelines at an EU level.

“We are strongly urging people not to fly home to visit family this Christmas - although we accept there may be a small number of very compassionate cases where this travel is essential,” he said. “We are asking most people who can skip a year to do it this Christmas and come next year instead.”

Official travel projections suggest there will be around 10 per cent of the usual air traffic at Christmas this year and about 40 per cent of usual ferry traffic, which means in excess of 100,000 people will still leave and depart from Ireland over the holiday period.