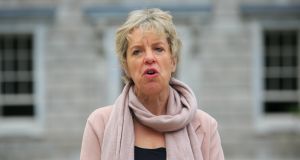 Labour Party Senator Ivana Bacik said there was a clear need to address the needs of undocumented children in Ireland. Photograph: Gareth Chaney/Collins

The Government has agreed to work with the Labour Party to improve its citizenship Bill for undocumented children who are born and live in Ireland.

The legislation has been adjourned at committee stage in the Seanad with an agreement for Minster for Justice Helen McEntee and sponsor of the legislation Labour Senator Ivana Bacik to meet officials “in the coming weeks”.

Ms Bacik said the Government will then act early in the new year to “progress the Bill further”.

The legislation proposes to grant citizenship to an estimated 2,000 children who have been born and live in Ireland but are stateless and at risk of deportation because of their parents’ illegal status.

The Minister said “the proposed Bill is very well intended and I support the objective of the Bill”. But she warned that they had to be “conscious of unintended consequences, of changing immigration laws at a time of huge flux” in the context of the Covid-19 pandemic and Brexit.

Ms McEntee said there were a lot of implications for the Bill if enacted as it currently stands, “not least for our standing in the EU with the Common Travel Area, Northern Ireland, our relationship with the UK but also with the department and other agencies”.

If enacted as it currently stands the Bill would make Ireland unique in the EU in granting citizenship to any child born on the island of Ireland regardless of the legality of their parents’ residence, the Minister said.

Ms McEntee added, “We’re going to meet in the next few weeks and look at the issues that have been identified here, the problems that we have and how we can move them forward, whether through legislation or through other means as well”.

She acknowledged the Bill “very much and intentionally focuses on children and the aim is to protect children who are already integrated into Irish society and face the risk of being removed”.

Ms Bacik described the Irish Nationality and Citizenship (Naturalisation of Minors Born in Ireland) Bill as “modest” and said “there is a clear need for us to address the situation of undocumented children in Ireland, including the spirit of ‘born here, belong here’.”

The legislation would reduce the residency requirement from five years to three and lift the requirement that parents must satisfy the eligibility criteria to ensure a child’s citizenship.

Fianna Fáil Seanad leader Senator Lisa Chambers welcomed moves to develop the Bill. She said: “Given that we spend so much time talking about the undocumented Irish in other parts of the world particularly in the United States calling for action to be taken there, the very least we can do is do as we say and do the same for people living in this country.”

Labour Senator Marie Sherlock said it was one of “modern Ireland’s great hypocrisies” that a person with the “right Irish blood” is entitled to Irish citizenship if they have an Irish citizen grandparent, regardless of where they lived.

But if they were born and live here, speak the language, know and love the country and “it is your only home, none of it matters if you have the misfortune of your parents not having the right paperwork”.