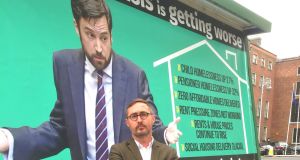 While Sinn Féin may be dithering over whether or not to move a motion of no confidence in the Minister for Housing, the selfie-loving minister has no shortage of confidence in himself.

But Eoghan Murphy seemed particularly stung this week when the party kicked off a personalised campaign against him by sticking his face on a mobile billboard and parking it outside Leinster House.

“The Housing Crisis is getting worse” began the message on the US-style attack ad, with “Don’t blame me, it’s just Murphy’s Law” written beneath an unflattering image of the Minister.

When the huge poster was unveiled on Tuesday, Sinn Féin’s housing spokesman Eoin Ó Broin posed happily beside it.

Murphy later hit back, accusing Sinn Féin of engaging with PR stunts instead of the issues while adopting a “Trump approach” to politics.

The two men – both from south Dublin and privately educated but inhabiting different ends of the political spectrum – have been sparring on this issue for a year but now Sinn Féin has stepped up the hostilities.

On Wednesday in the Dáil, Louth TD Imelda Munster talked about rent increases causing “untold financial misery and uncertainty” for many people and accused the government of failing to tackle the problem.

“Now Taoiseach, in my opinion, the Minister for Housing is out of his depth,” she declared.

Murphy retorted: “I will admit I’m not a great swimmer when it comes to things like triathlon — it’s not my strongest suit, I’m better at running and at cycling.”

At least Leo seemed to think it was funny. The Minister then gave a rundown of his government’s building programme. “If we are going to have a debate about housing let us stick to the facts,” he told Imelda.

“Let us deal with reality,” she shot back.

Eoghan pointed to “a dramatic slowdown” in rent increases in the last six months.

Imelda told him he was fooling nobody but himself.

“National rents have slowed to an 0.4 per cent increase. Okay?” he said.

“You’re out of your depth,” she repeated. On it went, back and forth.

“It goes from crisis to crisis with you,” she said.

Then he remembered the billboard. “Maybe you should busy yourself printing some more posters, renting out vehicles and standing in front of them and doing meaningless media events that don’t offer any solutions” he snapped.

“Aw, did you get upset?” smirked Imelda’s colleague, David Cullinane.

Paschal Donohoe got involved. “Is that the best you can do?” he cried, sounding very disappointed.

Funnily enough, the following day, the Minister tweeted some photographs of himself in his swimming togs, about to get into the sea. He had “escaped the Dáil for 40 minutes” to go for a swim with members of Dublin rock band, The Riptide Movement, to highlight the problem of plastic waste in our seas.

“A great bunch of lads,” he declared, before jumping in.

Eoin Ó Broin, by the way, is a man of many talents.

A disgruntled Fine Gaeler, irked by the Sinn Féin deputy’s targeting of Eoghan Murphy, pointed us to a very interesting interlude in his Twitter timeline.

Why? To prove that “Eoin Ó Broin is even posher than Eoghan Murphy”.

Well. We are most impressed. (Not only by Eoin’s culinary skills, but by the ability of political types to squirrel away all manner of trivia on rivals for future use. His gastronomic homage to the Iberian Peninsula was posted back in April.)

The thread begins: “Cooking for 10 tonight. A kind of Spanish/Portuguese surf and turf with a few offal surprises thrown in.”

Ó Broin includes lots of before and after photographs – the afters are much more appealing. So we have “Ox tail and tongue and pigs’ trotters and testicles.” Then “Salted sea bass, shelled gambas, butterflied gambas & anchovies. All ready to be cooked.”

And the ultimate labour of love.... homemade croquettas. “There seems to be a bit of black pudding or morcilla action going on here. It’s a big job.

“Eight hours in the kitchen and finally we get to eat.”

And what a spread Eoin provides. Lots of toothsome morsels on bread. Then his prawns done two ways – gambas al ajio and gambas pil pil. The salted and marinated sea bass, jellied ox-tongue and tail, potato onion and caper salad all look wonderful. For a final sweet and boozy flourish, Eoin rustled up Cava Sorbette, whiskey penicillin and fancy chocolate. A culinary triumph.

Richard Boyd-Barrett is down with the kids. We know this because he “dabbed” in the Dáil chamber two years ago, explaining to his slack-jawed audience that this is a popular dance move with The Young People. Who were we to argue?

However, the Minister for Finance is threatening to steal his crown. Paschal Donohoe was out early in his Dublin Central constituency on Wednesday morning to address a conference on early learning in the National College of Ireland.

It dealt with the role of parents as primary educators and Paschal, a father of two, spoke about the challenges parents face in getting to know their children well. But he slightly threw his audience at the beginning of his address by asking them what they knew about “flossing”.

Was he going to start them telling about the importance of getting kids to brush their teeth? No. It seems The Floss is this year’s Dab.

All the youngsters are doing it – as parents who want to learn with their children should know, which is why he incorporated it into his speech. Sadly, not literally.

“I could feel a bit of a twitch in my hips but I decided not to step out from behind the lectern,” he told us.

Oh, thank God for that. You’d never have heard that sort of talk in Michael Noonan’s day.

“It’s a dance that’s huge on YouTube. It comes from the online survival game called Fortnite, which has quite a few different moves in it,” he explained. “It became known to a much wider audience when Spurs player Dele Alli did the Floss at the corner flag after scoring a goal against Man United.”

Right so. He delivered his speech having first done the school run, telling his audience that people don’t bat an eyelid when they see working women such as politicians having to do childrearing duties along with their jobs. “But when a working dad or male politician does school run or whatever, it’s seen as something worth noting.”

As he sees it, “the challenge of parenting cuts both ways, whether you have a busy job or not”.

There are plenty of examples online of youngsters doing the Floss. But why bother when the Minister for Finance knows how to do it. We will not rest until he performs it. Budget Day would be a good time. Unless Richard Boyd Barrett gets there before him. It would make a change from that traditional budget day dance - The Fleece.

Leo Varadkar is a fast worker. In the Dáil on Tuesday, Micheál Martin remarked that this month marks 25th anniversary of the decriminalisation of homosexuality by then Fianna Fáil minister Máire Geoghegan-Quinn.

The Fianna Fáil leader asked the Taoiseach if he intends introducing legislation to facilitate a pardon for all those convicted here before decriminalisation.

“This dates back not to a latter era but to the mid-1970s, when up to 50 people were prosecuted” he said.

The Taoiseach told him that the government is working on a motion which he hopes will have all-party agreement. “We also intend to have a Government event, yet to be organised or arranged, to mark decriminalisation 25 years ago. I would like to reach out to Máire Geoghegan-Quinn and ask her to take part in that because she was the line minister who brought in the reform at the time and she deserves credit for it,” said Leo.

On Tuesday, an official soiree was just a thought.

Lo and behold, by Thursday, the gold-edged official invitations were already printed and out to Oireachtas members.

At St Patrick’s Hall in Dublin Castle, next Sunday week “The Taoiseach, Mr Leo Varadkar TD, requests the pleasure of the company of....”

And after they’ve had their canapés, guests can nip across Dame Street to the Olympia Theatre for the premiere of “A Day in May.”

This is a drama-documentary written by Colin Murphy and based on the bestselling book of the same name by Charlie Bird. Gerry Stembridge is directing and all profits from the show (tickets are €25.50) are going to Pieta House.

Minister Kevin “Boxer” Moran was putting himself about in Offaly recently and saying wonderful things about Sinn Féin TD Carol Nolan, who is nearing the end of her three-month suspension from the party for voting against a referendum on abortion.

According to the Tullamore Tribune, Boxer attended a meeting in the Clara Bog Visitor Centre last Friday and promised he would do everything he could to help the local heritage committee attract more visitors to the town.

“A huge chest of money” is coming down the tracks, he told them. It will be available as part of the Hidden Ireland initiative but suitable projects must be identified.

“Tap into it and use it to your advantage. I will give you all the help I can.”

Carol Nolan was also at the meeting and Boxer told his audience he would be working closely with her to make sure the area could take full advantage of the fund.

Clara is strong Cowen country, but the OPW Minister made no mention of Fianna Fail TD Barry Cowen or the local party councillor, Frank Moran.

FF feathers in the area are ruffled, we hear. Could this be Boxer wooing Nolan to run as a Shane Ross/Independent Alliance candidate in the reconstituted Laois-Offaly?

The TD is not likely to run for Sinn Féin and there is speculation she may leave the party because of her strong anti-abortion stance.

With Laois’s Brian Stanley the other sitting TD, the party is not expected to hold two seats in the new constituency.

However, Nolan could poll well as an Independent. Her Offaly heartland has a strong republican base and, despite competing with Renua’s John Leahy, she could take a good proportion of the anti-abortion vote.