Minister warns over Brexit getting bogged down on UK exit bill

Charlie Flanagan says negotiators should agree on principle of settlement, not figure 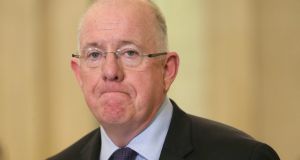 Mr Flanagan said he detected shifts in attitudes in both the UK and the rest of the EU bloc ahead of Brexit negotiations. Photograph Niall Carson/PA Wire

Divorce talks between the European Union and the United Kingdom must not be allowed to get “bogged down” at the outset with a dispute over the size of the UK’s “exit bill”, Minister for Foreign Affairs Charlie Flanagan has said.

The European Commission has suggested the UK may have to pay up to £60 billion before leaving the EU in order to fulfil funding commitments it has already made.

Ireland and a number of other states are concerned that attempting to deal with the UK’s financial liabilities first could create an early logjam in the talks, which are due to get under way in the coming weeks.

At a conference on Brexit organised by the school of law and government at DCU on Thursday, Mr Flanagan said the issue was not about punishing the UK or giving it a bill for leaving. Rather it was a “very legitimate expectation” that the UK would honour its commitments.

However, he said, the issue was “politically sensitive” and it would not be helpful to focus on a final figure. Instead, negotiators should attempt at the outset to agree in principle that a financial settlement was needed.

“The process could then proceed by agreeing a methodology for calculating the UK’s outstanding commitments, which should cover all legal and budgetary commitments. It is, however, imperative that we do not allow the negotiations to become bogged down on this issue and unduly delay progression to the second phase of the process – the future EU-UK relationship,” Mr Flanagan said.

With a week to go before EU leaders meet in Brussels to discuss their guidelines for the coming negotiations, Mr Flanagan said he detected shifts in attitudes in both the UK and the rest of the bloc.

While commentary in the immediate aftermath of the referendum last June “leaned towards a narrative of ‘punishing’ the UK”, he said, views had evolved towards an emphasis on “highlighting, protecting and consolidating” the benefits of EU membership for those who remain.

He added: “I think it is fair to say that the political perspective in the UK has also evolved – away from the rhetoric of the campaign and towards laying the foundation for a positive future relationship with the EU.”

Last week, the Government’s top Brexit official, John Callinan, said there were signs at EU and UK level of a gradual realisation that Brexit was “an act of great self-harm” and that the focus was on minimising that self-harm.

In his address, Mr Flanagan said the Government would be working to ensure that the rights currently enjoyed by Irish citizens in Northern Ireland were not diminished.

The Belfast Agreement recognises “the birthright of all the people of Northern Ireland to identify themselves – and be accepted as – Irish, or British, or both.” This was an issue that had no parallel anywhere else in Europe, Mr Flanagan said.