Northern Ireland Assembly negotiations to be extended until end of June 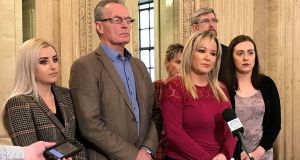 The negotiations aimed at forming a government in Northern Ireland are to be extended until the end of June.

Following British prime minister Theresa May’s announcement on Wednesday that a UK general election will be held on June 8th, Stormont parties indicated the prospect of making progress and reaching a deal in the North was almost impossible.

On Thursday, Stormont sources confirmed to The Irish Times that the talks aimed at forming an Executive and implementing outstanding agreements, following the snap Assembly election on March 2nd, will now be stretched out until the end of June.

This new deadline would be in the midst of the often contentious Orange marching season in the North leading up the Twelfth of July festivities.

After Sinn Féin’s meeting with Mr Brokenshire, its northern leader Michelle O’Neill said there is a growing belief among the nationalist community that the British government “would prefer no local Assembly to one which stands against the Tories’ Brexit agenda”.

“I told him the British government have done nothing over the course of last seven weeks to achieve an agreement. It’s clear that the people of the north who voted to remain in the EU are regarded as saboteurs by Theresa May and her clique of Tory Brexiteers. We are no more than collateral damage.

Meanwhile British Labour Party shadow secretary of state Dave Anderson has accused Theresa May of treating the people of Northern Ireland with contempt by calling the snap poll.

“They’re being ignored by this government in exactly the same way as they were ignored pre-Brexit when people were saying to them: ‘Are you really aware what you’re doing?’”

It emerged Mr Anderson, who is shadow secretary for Northern Ireland and Scotland, will not be seeking reelection as an MP for personal family reasons and on health and age grounds. Meanwhile, the Ulster Unionist Party has held discussions with a delegation from business and civic society regarding the political situation at both Stormont and Westminster.

UUP economy spokesman Alan Chambers MLA spoke of business community frustration at the lack of stability in the North caused by the political uncertainty. Mr Chambers said Iain Hoy of the CBI, Roger Pollen of the FSB, Chris Morrow of the NI Chamber of Commerce, Seamus McAleavey of NICVA and Glyn Roberts of Retail NI “share our desire for stability, locally accountable government and growing the Northern Ireland economy”.

Sinn Féin said on Thursday it will not abandon its demand that the DUP leader Arlene Foster stand aside if the Northern Executive is to be revived.

The party’s deputy leader Mary Lou McDonald said that Ms Foster “needs to stand aside for a period” to allow the scandal of the renewable heat incentive scheme, which caused the collapse of the executive, to be investigated.

Sinn Féin will also continue to insist that the DUP agrees to an Irish language act and to the legalisation of same sex marriage, Ms McDonald indicated, in a briefing to journalists at Leinster House.

Ms McDonald said that the preference of Sinn Féin in the event no agreement is possible is for fresh elections to the assembly to be held.

As there is no government in place at Stormont, on Friday the British government is to publish its plans for emergency legislation to ensure local rates bills in Northern Ireland can be issued.