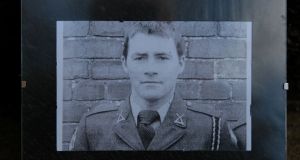 A family photograph of the late Pte. Hugh Doherty, Letterkenny, Co. Donegal who was killed in the Labanon. Photograph: Declan Doherty

The State has formally apologised for the failings 37 years ago of Defence Forces operations, when a soldier was killed and another disappeared as they came under attack while manning an isolated observation post in Lebanon.

Minister of State for Defence Paul Kehoe apologised to the families of Private Hugh Doherty (20) from Co Donegal who was shot dead in the incident on April 27th, 1981 and Private Caomhán Seoige (20) from the Aran Islands, who was abducted and whose body has never been recovered. The attackers remain unknown.

Mr Kehoe met the families before the publication on Friday of an independent review into the circumstances surrounding the attack on observation post 6.22 Delta, west of the village of Dyar Ntar when the two men were part of the Irish Battalion serving with the United Nations Interim Force in Lebanon (Unifil).

The review was carried out by retired High Court judge Roderick Murphy who criticised the failure of the Defence Forces to tell the families the results of investigations carried out into the tragedy at the time.

The Doherty family heard a rumour that Pte Seoige had shot their brother and this was “not assuaged until they met the Secretary General of the Department of Defence on July 1st, 2014”.

This rumour “would not have had credence” if the family had been told the results of the investigation by Col Vincent Savino carried out from 1982 to 1984.

Mr Justice Murphy also described as “a mystery and a matter of great concern” that neither the original nor copies of the Savino report were in the military archives.

The only copy available was an incomplete version of the report, provided by a former soldier. He also said it was “extraordinary” that significant forensic exhibits were missing and that there was no documentary evidence about them, including the bullet casings found at the scene.

The report of a separate investigation by the Unifil Headquarters Board of Inquiry was redacted from the 100-page review because it was, by law, an “internal confidential document”.

The judge, who interviewed more than 50 people and carried out extensive archival searches, also highlighted operational failings, criticised the lack of risk assessment and supervision of the unprotected observation post.

In 12 pages of findings and recommendations he stressed that “the interests of the families of soldiers killed or missing in action is paramount and should not be inhibited by concern regarding liability.

“The absence of, or delay in communication of the results of inquiries fosters resentment and misunderstanding.”

He said concerns by former soldiers about inadequacies relating to the observation post and the subsequent investigations, were “shared by and large by all of those whom I have interviewed”.

But he said there was “no specific evidence or particulars of cover-up by either the UN or the Savino investigations”.

He said however that “colleagues of those killed, injured or missing in action have a legitimate interest in the outcome of investigations”.

The Minister said, “I want to repeat my apology to both families for the pain and suffering they endured following the tragic loss of their loved ones and I would like to thank them for their patience and co-operation in the completion of this review”.

In a statement Mr Kehoe said, “Errors that occurred at the time of the incident and also in the way the subsequent investigations were conducted and communicated, or not communicated, must never be repeated.”

He noted that the report “also highlights the manner in which these two soldiers were deployed in an isolated location. This should never have happened.”

Chief of Staff of the Defence Forces Vice-Admiral Mark Mellett said “I can assure both families that the hard lessons the Defence Forces have learned from this tragic event continue to shape how we train and prepare our personnel for overseas service today and into the future”.