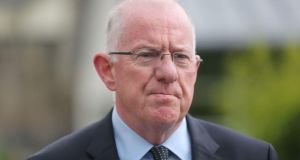 The Department of Justice is examining a series of reforms to the way rape trials are conducted but proposals to give victims separate legal representation are proving difficult.

Minister for Justice Charlie Flanagan said he intended to bring a package of procedural and legislative changes forward by the end of the summer, but conceded that providing separate legal representation to victims would be complicated by the nature of the trial process in Ireland’s legal system.

The change has been called for by some Opposition politicians and victims’ groups, but it is understood that while there is scope for providing greater protection and assistance to alleged victims in court, granting full legal representation may not be possible.

Mr Flanagan ordered a review of how rape cases were conducted following the trial of rugby players Paddy Jackson and Stuart Olding in Belfast earlier this year. Both men were acquitted but there were protests afterwards at the treatment in court of the complainant, who had to endure a lengthy cross-examination.

Although complainants in rape and sexual assault sex cases have much greater protection, including anonymity, in the Republic’s legal system, victims’ groups have long called for changes to the way they are prosecuted.

It is understood part of Mr Flanagan’s package of nonstatutory reforms will be better training for gardaí and for judges dealing with sensitive cases. Officials are also examining if victims of alleged sexual assault should be allowed to prerecord their evidence to the trial.

Mr Flanagan met a number of advocacy groups in the wake of the Belfast trial, and a number of changes sought by the Rape Crisis Network form part of the basis of the review.