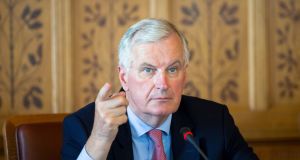 The EU’s Brexit negotiating team had made quite clear British backstop proposals could not be time-limited and would have to encompass commitments to major regulatory alignment if they were to run at all.

Failure to make “significant progress” along these lines by the summit at the end of this month would jeopardise the whole Brexit talks process.

The “temporary customs arrangement” proposals published on Thursday goes some way to meeting such requirements, but still fall well short of that “significant progress”.

When a senior commission official briefed journalists two weeks ago, he explained a time limit would undo the essential guarantee element of the backstop - a pledge that whatever happened in the broader talks on a future relationship the frictionless Border would be safeguarded.

What has emerged from London is only an aspirational time limit, a formula that is seen as little more than a facesaving exercise to save Brexit Secretary David Davis’s blushes. It should not be an obstacle to talks progress and certainly suggests travel in the right direction.

More broadly, the EU official had cast doubt on the viability of any UK-wide solution to the backstop issue. For the EU, “we have a recognition that the backstop has to be Northern Ireland-specific. And we do away with the fantasy that there is an all-UK solution to that.”

And he insisted UK commitments to extending aspects of regulatory alignment to the rest of the UK were inadequate and unacceptable cherrypicking of aspects of the single market.

The new paper does not address this issue in any detail. Although the paper does indeed provide suggested legal text for the protocol in the Withdrawal Treaty on customs, it does not provide any text at all on the scope of regulatory alignment. Yet that had been an explicit demand from the EU task force.

Responding to the publication on Thursday afternoon, the EU chief Brexit negotiator, Michel Barnier, tweeted a general welcome with reservations: “I welcome publication of #UK proposal on customs aspects of IE/NI backstop. We will examine it with 3 questions: is it a workable solution to avoid a hard border? Does it respect the integrity of the single market /customs union? Is it an all-weather backstop?”

EU and UK negotiators are due to meet on Friday morning and Barnier is planning to give a press conference in Brussels at 1.00 (Dublin time).