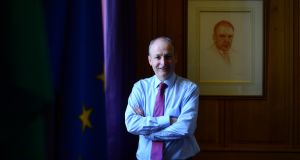 Taoiseach Micheál Martin in his office, with a portrait of Seán Lemass in the background. Photograph: Bryan O’Brien

In the conference room next door to the Taoiseach’s office, two oil paintings lean against the wall, having been carefully placed on the floor, cushioned from damage by hessian cloth.

One is of an ageing Éamon de Valera. The other is of a young Michael Collins.

Both wait to be hung in the office of the new leader of the land.

It’s perhaps the first time in a century the towering figures of Fianna Fáil and Fine Gael have shared the same wall in the taoiseach’s office. The two paintings, never in a permanent place, are also a reminder that tenancy of the office of taoiseach can be as transient as student accommodation.

Micheál Martin comes around the desk, dressed in shirtsleeves and tie.

Age wise, he is in between de Valera and Collins. He may be the new Taoiseach but he was marked as a future leader upon first being elected in 1989. Like most others who passed through Hawkins House, his stint as minister for health sent him sliding down the board. It earned him the sobriquet “former future taoiseach”, even though he achieved more than others there, including the smoking ban.

With 2½ years to prove his worth, he has needed to hit the ground running. Colleagues from other parties say he has done just that. “He’s been very focused, very organised,” says a Fine Gael Minister. When it comes to the legacy, or leaving his mark, he surprisingly leans less towards the big gestures of Charles Haughey, more to the practical Albert Reynolds. He refers to education, an interest of his, as a key to society, particularly for those with special needs. But the agenda he sets for himself is more prose than poetry.

“I wasn’t fazed by a lot of stuff that went on [during the hectic first month]. I’ve been through a lot of that before. And what I want to look back on as Taoiseach is, ‘We did this, and that, and we got policy initiatives over the line.’ I don’t believe in promising legislation that takes three or four years to deliver.”

He agrees the first month was frenetic and Fianna Fáil didn’t get off to an ideal start, with the sacking of Barry Cowen and disgruntlement over ministerial appointments.

“I didn’t anticipate it and didn’t want it to happen, if I’m honest,” he says of Cowen’s sacking. “We haven’t been in government for 10 years. A lot of people worked very hard and would have anticipated positions. I understand people’s anger.”

Despite that and the rows over the pandemic unemployment payment, the green list, and Green Party indiscipline, he argues the Government achieved a lot in its first month: the July stimulus, the back-to-school plan, the first North-South ministerial council for three years and 11 pieces of legislation.

Martin says he is not taking holidays this summer given the seriousness of the coronavirus pandemic.

“I do not want to hang around,” he says. He wants to get the Climate Change Bill, the Land Development Agency and Marine Development Bill in train, all by early autumn.

So how is he getting on with Fine Gael and the Greens, and particularly with Tánaiste Leo Varadkar? He says fine but avoids spelling out the dynamics of his relationship with Varadkar.

He talks of the “clearing house” structure between him, Varadkar and Eamon Ryan that tries to nip any developing issue in the bud.

Asked if Varadkar has been stealing his thunder a little with high-profile comments, he says: “I’m not that person who will react on a daily basis to comments. Having been in politics for a long time I’m also aware that comments get misinterpreted. And people add legs to various interventions that various ministers or politicians can make, so I genuinely stand back and count to 10.”

He adds: “We don’t let things develop to a situation to become serious, or substantive. And I think we do have mechanisms and we have regular contact on the phone if issues arise. And I think it’s down to a calm approach to all of this and not to be obsessed by the daily commentary.”

The breadth of the impact of Covid-19 is hard to comprehend. Even now he accepts it will have an impact on programme for government commitments on health and housing (despite the programme being drafted during the pandemic).

“Housing construction figures are going to be impaired by Covid. The resumption of non-Covid services in health will also be impacted significantly.”

He says it will be felt in waiting times, and in early diagnosis of cancer, heart disease and a range of other conditions.

“These are huge challenges and worries for us. And that’s an ongoing impact of Covid-19.”

He says he is determined to progress as planned with Sláintecare and the new consultants’ contracts, but concedes health may need more expenditure.

“Preparing for capacity issues, with the flu season hitting alongside Covid, that will create particular specific challenges to the acute hospital system and the primary care setting in particular.

“It is going to be very, very challenging, and protecting our people is the number one [priority].”

He defends the decision to keep pubs closed and to restrict attendances at outdoor events to 200, and recognises the huge disappointment it caused.

His defence is “a significant spike in numbers” in the past week, with the danger of community spillover. He agrees the approach is conservative in some areas but argues that a balance has to be struck between protection and reopening.

“The idea that one can govern the virus, with certainty, is a misplaced idea. The virus will come back to bite us,” he says.

Martin says he believes the “partnership government” will go the full distance of five years in office. He also believes that Fianna Fáil can regroup and renew while in office. He dismisses any suggestion the party is facing demise or will be devoured by Sinn Féin after the next election. He does accept mistakes and failings, however.

“I think we have a very strong cadre of newly elected TDs, in addition to those elected in 2016. That gives the party great capacity to do well in the next general election.

“Nor am I fazed by people’s commentary. I had all of this in 2011, [everybody saying] we would never recover and the party was finished.

“I think we made very good progress . . . The last local election probably gave us a false read into the general election and that is one regret I have.

“I think some candidates, perhaps who did very well in the locals, thought it was a slam dunk for the general. That was not the case . . .

“We will have a full-scale review of the election with an independent chair. We’re still the largest party in the Dáil, which gets forgotten . . . We did suffer a setback in the election so we want to do much better. I acknowledge that there are lessons to be learned from that.”

He also says he will deliver fully on the Government agreement. That means him becoming tánaiste in December 2022. Will he lead Fianna Fáil into the next election? “Yes.”

And then there is Brexit, which has been sidelined as the big issue by the pandemic. Unfortunately it has not gone away and there has been halting progress – if even that – in talks between the two main negotiators, Michel Barnier and David Frost, on a trade agreement.

“I am worried about Brexit,” he says. “I had an initial conversation with Boris Johnson and was due to meet him for lunch this week, but the passing of John Hume necessitated postponing that. We hope to get together again in the course of the month.

“We both agreed it was essential to get the Brexit done in a way that would bring us free trade and a tariff-free [arrangement] that was in the interests of the UK and also of the EU.

“There has been progress on the protocol but it’s moving on a bit in terms of the full agreement.

“This week the Government has facilitated and agreed the drafting of a comprehensive Brexit Bill again to make sure there is continuity on a whole range of key issues, department by department. It’s somewhat similar to the Omnibus Bill but more up-to-date and more focused on specific issues such as recognition of standards.”

So what is the Government position?

“We are gearing up for Brexit. Any type of Brexit will be damaging. Our job is to limit the damage. The best outcome will be an overarching agreement that will facilitate ongoing sensible trading arrangements that will avoid tariffs and quotas.”

And do his instincts tell him this will happen?