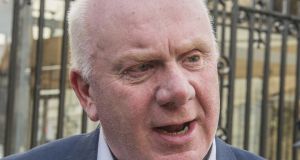 A Fianna Fáil TD has called for an extraordinary meeting of his party’s Oireachtas members during the Dáil recess to discuss the Government decision to keep pubs closed until September.

The Tipperary TD Jackie Cahill was one of dozens of rural parliamentarians who expressed alarm about small country pubs’ chances of survival following a second delay in their reopening schedule.

Mr Cahill said he had written to Government chief whip Jack Chambers requesting him to convene a special meeting of the parliamentary party within the next week.

“I am very worried about the future of pubs which have been closed for almost six months. We can’t wait until the Dáil returns in September to discuss this,” he said. “We [in Fianna Fáil] need to argue for a serious financial package for publicans,” he said.

It came as Ministers privately expressed concern about the Cabinet’s response to the Covid-19 pandemic, with some questioning the messaging coming from the Department of the Taoiseach.

One source said there were growing fears that the pandemic would become “increasingly political” amid tensions over the way in which plans are being announced.

Some Ministers singled out the decision not to reopen pubs and said a plan should have been devised to support the sector and it should have been announced alongside the news of pushing back the roadmap to reopening.

Rural TDs and Senators from across a range of parties, and Independents, have expressed concern at the three-week delay, the second in a row.

The Rural Independent Group wrote to the Taoiseach seeking an urgent meeting for what they described as a “hammer blow to the heart of rural Ireland”.

“It’s not enough for the Government to say pubs can apply for the restart grant, as many of these pubs simply will not make it that far, said its leader, Mattie McGrath.

Niamh Smyth, a Fianna Fáil TD for Cavan-Monaghan, said many rural pubs had already been on a knife edge and the continuing delay might undermine their future existence.

“These pubs are dotted around the countryside and are a focal point for a particular generation who would otherwise suffer from rural isolation. These are family businesses that depend on the pubs being open to help rear their families.

“Some might now decide to call it a day unless there is some incentive or compensation to remain open.”

Fergus O’Dowd, a Fine Gael TD for Louth, said there was a need to support publicans with ongoing costs that they have no income to meet.

“They do play a key part of our social life. They do accept that health is wealth, but they are suffering. They are huge employers locally,” he said.

Ciarán Cannon, a Fine Gael TD for Galway East, owns a pub in Athenry but said he agreed with the decision.

“I think it was the right decision. If you assemble a group of experts and they say it’s not safe for people to congregate in these settings, it is not safe.

“For me the first priority is to get children back to school,” he said.

Senator Eugene Murphy of Fianna Fáil said there were divided views but all agreed it was a huge crisis for rural publicans. “They are very disturbed. I will be pressurising government to come up with something, otherwise many will not be reopening.”

His constituency colleague, Michael Fitzmaurice, argued that the reopening of pubs in a responsible manner would lessen the problem of house parties taking place across the country.

“While I understand the concerns of the health experts, I believe that pubs can reopen safely,” he said.