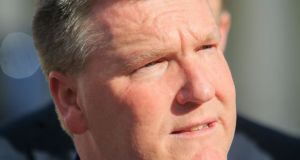 Michael McGrath: We will be entering a period of great challenge. File Photograph: Gareth Chaney/Collins

“We will be entering a period of great challenge, there will be very major decisions to be made both on the health front and on the economic front, I think that’s where we really need to hit the ground running,” he told Newstalk Breakfast.

“There are so many businesses out there that are struggling or have still not reopened, well over a million people either on unemployment support or having their wages partly paid by the State so there is no question where we need to start. It will have to be rebuilding and rebooting the economy and trying to provide the supports that are necessary.”

A range of measures will be announced in July to build on existing supports, requiring legislation in some areas, he added. “There is a new €2 billion credit guarantee scheme to provide working capital for businesses that legislation needs to pass to get that up and running into effect, provision for the warehousing of tax liabilities for small businesses so that they don’t incur penalties or interest charges, that too needs to be passed.

“We will look to build on some of the existing grant supports and the loan schemes that are there, try to improve them where we can, we will also look to accelerate the capital investment programme for our country as an important stimulus.

“We will need to set out a future plan and pathway for the income supports that are there at the moment — both the pandemic payment, but also the wage subsidy scheme because employers need to plan for the future, so I think it is about providing certainty on all these issues and as the months go by we will be working on a more long term, national economic recovery plan and the intention would be for that to be introduced on Budget Day come October, so that is a huge amount of work ahead.”

He added: “This is a historic alliance between Fianna Fáil, Fine Gael and the Green Party and I think it is time for us all to move on and to have a more mature politics, a more reflective politics that focuses on the issues rather than attacking personalities or just being hostile for the sake of it.”

Meanwhile Green Party TD Ossian Smyth has said he was not surprised at the scale of the endorsement of the programme for government by his party’s members.

Mr Smyth defended the length of the count of Green Party votes. “We wanted to be seen to be fair.”

When asked if he thought the party would lose members because of the vote, he said no and that the TDs who had opposed the programme for government had already indicated that they will work to implement the programme.

Fine Gael’s Martin Heydon acknowledged that there had been much “soul searching” among members of the party for whom the prospect of coalition with Fianna Fáil “did not sit well”.

He had no doubt that the three parties would all come together to deliver the “very ambitious” programme and that the government would last five years. “I trust Fianna Fáil and the Green Party to buy into this wholeheartedly, to have a genuine approach to this partnership.”