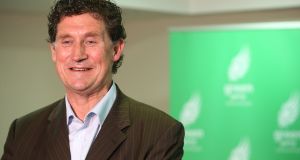 Green Party leader Eamon Ryan announces that the party had voted in support of the proposed programme for government. Photograph: Sam Boal/RollingNews.ie

People would have laughed at such an outrageous suggestion when Fianna Fáil lay in tatters and its future looked bleak. No chance, Micheál.

But he’s done it.

And if that notion wasn’t far-fetched enough, the idea of Fianna Fáil and Fine Gael going into government together was simply inconceivable.

And here they are now: the immovable object bedding down with the irresistible force. So eager to go hopping into power together they could barely wait to get permission to do so from a niche small party which wasn’t even around when they were in their pomp.

But now they are together. The deed is done.

Friday marked a momentous day in the Irish history, a day when the political world turned on its axis and Fianna Fáil and Fine Gael put aside almost 100 years of bitterness and enmity to work together in government.

Will they or won’t they? That was the question all day on Friday as party members voted on the next step. The irony of it all was that the answer to that big question wasn’t ever in doubt where Fianna Fáil and Fine Gael were concerned. Instead, it was the Green party’s decision which was keenly awaited.

The Taoiseach was able to announce by late afternoon that Fine Gael was aboard, and in a big way. A few hours later, soon-to-be taoiseach Micheál Martin announced that the membership of Fianna Fáil had also roundly endorsed the programme for government.

It was just the Greens left to declare and despite a week of speculation over whether the party would back a decision to go into government, they too opted to go into power with a sizeable majority in favour.

And the alliance everyone thought could never be done until that cohort grew old and a younger generation couldn’t really feel what the fight was about in the first place, happened.

And guess what? Outside of the irredeemable anoraks and distracted hacks competing to tweet each nuance of nothingness from a day when the tectonic plates refused to shift for the sake of atmosphere, this so-called seismic event passed off with little fuss.

The general mood outside of the committed and mildly curious was one of “What took yis so long?”

So the old order is gone.

To be replaced with what? A new old order?

Not if the Green Party has its way. Their buy-in facilitated the new dispensation on this “Friday when we look to the future”, said leader Eamon Ryan, who looked exhausted but extremely relieved when the result of the party’s vote was revealed by video conference.

Meanwhile, for the older observers, the sight of the leader of Fianna Fáil, on the cusp of becoming taoiseach, making his pre-elevation speech in the ballroom of the Burlington Hotel gave pause for less than reassuring memories. Micheál Martin and colleagues welcoming this new era from the shiny surrounds of the Burlo, scene of many an Fianna Fáil beano back in the day.

And now they are back. The Phoenix Fáil party.

He wasn’t counting his chickens before the Greens gave their imprimatur to his three-legged government. Friday was just “a working day” he said, refusing to get ahead of things and give himself a big welcome.

All day reports were coming from the Green camp that the vote was very tight. At one point in the afternoon reports of legal challenges halting the count swept Leinster House. But, as Roderic O’Gorman pointed out on the evening news, “Our count centre is a bit like Fort Knox at the moment – there is no information getting out.”

So wild speculation filled the vacuum.

Which meant that Micheál wasn’t going to get too excited. The lack of a result “has a kind of impact on my mood so I’m just taking it handy”.

A clue as to how things were going in Greenland was smuggled out by TD Ossian Smyth at about 7.30pm when he tweeted a smiley-face emoji. A heartening (or worrying) indication of things to come in this administration.

The Taoiseach looked very relaxed when he communicated his party’s result on the steps of their Mount Street headquarters. And while he wasn’t giving anything away about who would get the prize jobs in cabinet and at minister of state level, he remarked quietly as he was walking back towards Government Buildings: “I’ll be striking a blow for equality.”

Could this mean big roles for the Three H’s – Heather Humphreys, Helen McEntee and Hildegard Naughton? We saw Hildegard, the Galway-based TD who is tipped for office, driving into Leinster House in the late evening when the place was near deserted.

At this point, the rumour mill was in overdrive. The non-information from Fort Knox was that the result was on “a knife edge” and people in the Green Party hoping for a Yes vote were very worried.

Fianna Fáil, on the other hand, had a complete tally operation in full flow in the Burlo and the word and percentages from Dublin 4 was that a return to government was very much in order.

Leo had gone off to check out his new offices.

The Dáil meets on Saturday morning in the Convention Centre on the banks of the Liffey in Dublin’s docklands when Micheál Martin will, after decade of effort, eventually get his heart’s desire.

The Green Party is all set for action. Deputy leader Catherine Martin showed a fine aptitude for ministerial waffle when she spoke about “a job of work to be done” and their intention “to hit the ground running”.

Eamon Ryan was subdued but happy looking. “I am proud of our country. I’m proud of our democratic institutions that have been here for 100 years,” he said. As for his work and the party’s work: “Never ever give up. Never give up.”

Micheál Martin will agree on that. He never gave up either and now he is to be taoiseach.

But will Fianna Fáil and Fine Gael truly get on? Or is one of them the black widow in the relationship.

Which of them will devour their mate?