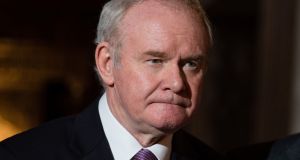 Martin McGuinness is the only person in the republican movement capable of making Sinn Féin’s position in government in Northern Ireland work while at the same time keeping the party’s core voters happy, a former senior IRA member turned informer has said.

Sean O’Callaghan said Sinn Féin had wanted to make the institutions work and that desire was spearheaded by Mr McGuinness, who resigned as Deputy First Minister on Monday.

Speaking at an event in Westminster on Tuesday, DUP MP Sammy Wilson said the former deputy first minister was accommodating in trying to secure deals in Stormont but was frequently “overridden by people outside”.

The debate at Policy Exchange, a centre-right think-tank, in London was to surround the effects of Brexit on Northern Ireland but the agenda switched to the events around Mr McGuinness’ resignation and what it meant for the future of the institutions in Northern Ireland.

“The only person, in my view, in the whole Republican spectrum capable of pursuing a strategy which meant that you wanted the institutions to work, at least in the medium term, while also retaining control of your base... Martin McGuinness, in my view, was the only person capable of holding that together and pursuing the strategy,” he said.

Discussing the effects of the Brexit vote on Ireland, academic Graham Gudgin, a former special advisor to then first minister David Trimble between 1998 and 2002, said there is an impression that Irish government officials were engaged in “displacement activity” and ignoring some of the effects of what could happen to Ireland as a result of the UK leaving the EU.

“They seem to be happier to talk about how daft the Brits are in what they are doing on Brexit than on the dangers to the peace process. I have seen almost nothing on the very real and important dangers, lets say, to the Irish agricultural industry,” he said.

The charge was rejected by Irish ambassador to Britain Dan Mulhall who said that the EU’s position could not be decided until Britain released its objectives for the Brexit talks.

“I have never seen an issue which has preoccupied and engaged our system in the way this one has,” he said.

“There is a huge amount of work going on and the fact that it does not appear in daily reports in the media is probably a good thing... the fact is these negotiations have not started yet and far from being supine in our adherence to EU policy, there is no EU policy on Brexit because we don’t yet know what the position of the British government will be. And it is only when the British government states its set of aspirations regarding its future relationship with the EU that we can possibly have an EU position in response.”