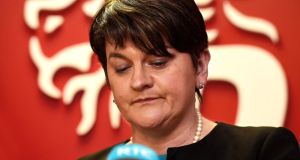 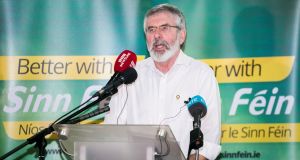 The prospect of avoiding imminent and “brutal” Northern Assembly elections appeared remote last night, despite Arlene Foster saying she is open to talks with Sinn Féin to prevent the collapse of Stormont.

The DUP leader and outgoing First Minister also announced plans to carry out a public inquiry into the flawed “cash for ash” heating scheme which precipitated this crisis.

“We are willing to take part with any discussion to see if a way forward can be found,” Ms Foster said yesterday. “I remain open to further discussions with Sinn Féin or any of the other parties in the Assembly over the next few days,” she said.

Sinn Féin has until Monday to nominate a replacement for Martin McGuinness who resigned as deputy first minister on Monday. Therefore, in theory, the DUP and Sinn Féin have until Monday to find a way out of the crisis that would avoid elections and safeguard the Northern Executive and Assembly.

But last night there appeared little prospect of such an outcome. Sinn Féin was dismissive of Ms Foster’s possible olive branch, while the British and Irish governments also appeared reconciled to elections to be followed by possible protracted negotiations to get Stormont back up and running.

Taoiseach Enda Kenny spoke to British prime minister Theresa May on the phone last night. The two leaders “agreed the situation is very serious” and the governments would “work closely over the coming period”, a Government spokesman said.

Northern Secretary James Brokenshire and Minister for Foreign Affairs Charlie Flanagan have been keeping in touch with developments but again were pessimistic that a “rabbit could be taken out of the hat”.

“We can’t see the situation being retrievable this side of Assembly elections,” said a senior Dublin source.

Ms Foster said she foresaw a divisive and “brutal” election ahead.

“Undoubtedly we are in for a period of direct rule. I really do regret that. I think what the people of Northern Ireland want is stability but that has all been thrown into very sharp relief by the actions of Sinn Féin for hugely party political reasons and not for any other reason,” she said.

Sinn Féin president Gerry Adams, however, accused the DUP of not honouring the principles of powersharing. Sinn Féin was preparing for an election and would only resume partnership with the DUP on the basis of “equality and fairness”, he said.

“Sinn Féin is totally wedded and bedded in this process so we want to go back with a mandate which allows us to engage with whoever wants to be in the Executive, but as Martin [McGuinness] pointed out, there will be no return to the status quo,” said Mr Adams.

Ms Foster said a DUP Minister would announce plans for a public inquiry into the renewable heating incentive scheme later this week. “It’s needed to restore confidence in the institutions and also for me personally, to retain my integrity, which has been completely maligned over this past number of weeks and months,” she said.

The scheme introduced by Ms Foster in 2012 when she was minister for enterprise could, due to lack of cost controls, result in the taxpayer being liable for overexpenditure costs of up to £490 million (€565 million).

Sinn Féin was dismissive of Ms Foster’s proposal. Sinn Féin Assembly member Michelle O’Neill said if the DUP was serious about finding a resolution Ms Foster would have stepped aside last month.

Sinn Féin has insisted that, even after elections, the “status quo is not an option” and that it will be seeking movement on issues such as the Irish language, the future of the Maze prison site and “respectful” partnership government.

A visibly ill and weak-voiced Mr McGuinness made his resignation announcement at Stormont Castle on Monday. Mr Adams said it would be a matter for Mr McGuinness as to who led Sinn Féin into the expected elections, likely to be held in late February or early March.