Source of €11m to relocate 40 minors from Calais not identified 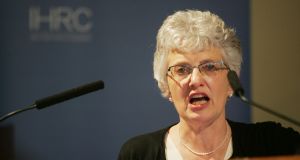 Katherine Zappone: she estimates between €1.5m and €2m will be spent on services and support for the children, and a further €8m to €10m on accommodation

The Department of Children has not identified the source of €11 million needed to home 40 unaccompanied minors from a former Calais camp in France.

Minister for Children Katherine Zappone sought Cabinet approval yesterday to enforce a motion passed by the Dáil to accept 200 minors from the former camp. It is proposed an initial 40 minors, mostly aged 16 or 17, will be relocated in Ireland this year at a cost of between €9.5 million and €11.5 million to Tusla, the Child and Family Agency.

It remains unclear where the resources to fund the move will come from. No budgetary provision has been made for such a decision, and the Cabinet heard other services may be affected. A Government spokeswoman said the money would have to be found through savings.

Ms Zappone estimates between €1.5 million and €2 million will be spent on services and support for the children, including legal and therapeutic interventions. A further €8 million to €10 million will be spent on accommodation. Other areas, including health, dental care, mental health services and other specialist supports, may require additional funding.

Several Ministers expressed concern this could be a worrying precedent that could have severe financial implications.

Minister for Finance Michael Noonan has made it clear the money must come from within existing allocations to ensure compliance with fiscal rules. He said the Government was committed to accepting the minors, as had been demonstrated by the Dáil vote. However, he insisted this should not be taken as approval of any additional resources outside of those agreed in the estimates.

Department of Children officials are due to travel to France next week to assess around 20 young people, and identify which ones wish to come to Ireland. Ms Zappone said her understanding was they were all male and all aged 16 or 17.